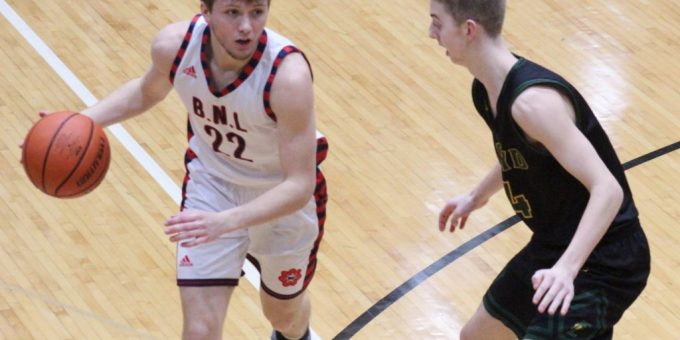 BEDFORD – When somebody mentions rebuilding – a term most coaches hate and avoid, by the way, because it suggests or implies an expected lack of success – Floyd Central’s Todd Sturgeon can smile, that ‘Oh, really?’ amused glance.

Got a hammer? Try this construction project. Lose nine seniors, including an Indiana All-Star, plus two assistant coaches, and defend your league championship. Most programs would crumble to the foundation.

Yet here come the Highlanders, high atop the Hoosier Hills Conference while chasing their third straight crown, headed for a showdown with semi-surprise league co-leader Bedford North Lawrence on Thursday night.

Few predicted this pair to be in this position when the season began. BNL lost four starters and featured a new head coach. Floyd almost needed name tags on the jerseys at the first practice. Both have proven the results on the court far outweigh the expectations and predictions of the ‘experts.’

Floyd Central (12-4 overall, 4-1 in the league) will invade BNL Fieldhouse in a key clash for the conference lead. The Stars (10-8, also 4-1) are responsible for the race chaos, fresh from an upset road win over Jeffersonville that changed the landscape. Suddenly, this is the biggest game of the regular season to date.

“We’ve put ourselves in this position,” BNL coach Jeff Hein said. “We’re where we expected to be, at this point in the race, with two of the best teams (including a later visit to New Albany) left. We’ll have to play really well.”

How in the world has Floyd done it? First, the lone returning veteran is a special player. Junior guard Jake Heidbreder stepped into the void of departed star Cobie Barnes (now at Indiana State), and he’s excelled, averaging 20.5 points per game. Second, two young kids with absolutely no varsity experience leapfrogged into the starting lineup. Third, Sturgeon is no dead fish on the sideline.

“It’s been an interesting trip,” said Sturgeon, now 103-32 in six seasons. “The younger guys (freshman Caleb Washington and sophomore Cole Harritt) came around quicker than we thought. We knew they would have to play. Those guys have made a significant improvement and did it quickly.

“Jake, for lack of a better analogy, was Robin to Cobie’s Batman. That’s always a transition, sometimes a really hard one. It’s never easy being the No.1 focus in scouting for every single team you play. That’s been a challenge for him and he’s handled it well.”

Heidbreder, a sizzling outside shooter who already holds a recruiting offer from Indiana State, scorched North Harrison for 33 points earlier this season. He will be a constant fixture at the top of the offense, looking for screens to erase defenders. Grant Gohmann (10.5 points) and Washington (9.5) are post powers, but Heidbreder is the catalyst.

“He shoots it from deep, he drives it well to the basket,” Hein said. “They run a lot of ball screens for him up top, and he plays off of those. It reminds me a lot of the stuff New Castle used to run for Zach Hahn (later a Butler star), trying to get Heidbreder as many looks as he can get. If you can find a way to limit his good looks at the basket, it gives you a chance to compete with them.”

How has BNL done it? Similar fashion. Brayton Bailey is the BNL agitator, leading the Stars in scoring (20.1), rebounding (8.3) and assists (5.4). Lately, during the recent three-game winning streak, others have shouldered more load, including the career-high 26 points from Kooper Staley that spearheaded the 61-60 win at Jeffersonville and drew immediate attention.

“No one is surprised by anything Bailey does,” Sturgeon said. “He’s terrific, plays hard and competes like crazy. Here lately Staley and (Colten) Leach have knocked shots in, other guys have made big plays. Bailey is so good at driving the basketball, it’s hard to guard him with one guy, you have to make tough decisions with him. I admire that kid a lot.”

Floyd has three losses by a combined total of five points, including a 52-50 loss to Evansville Reitz last week. The margin for error has been thin.

”I think our conference has squeezed together and there’s not much difference in all of us,” Sturgeon said. “There won‘t be blowouts in our league. Bedford has gotten better, they’re not turning it over, defending better. It’s just a couple of possessions a half. I don’t think Bedford has made a miraculous turnaround, just tightened up.”

Floyd has authored a few blowouts of BNL in recent clashes, including last year’s 69-36 demolition. Barnes had 32 points, more than the Stars when he finally exited the court.

BNL has been tougher than that this season. The victory at Jeffersonville showed BNL’s growth and potential.

“We played really well on both ends of the floor,” Hein said. “We did a good job playing the zone defense, packed it in and forced them into perimeter shots, and that’s what we wanted them to do. They took the bait. They hit 11, but it kept the ball out of the middle of the floor.

“We made shots, and that always helps. Kooper (with 6 treys) was phenomenal, had things going and was in rhythm, and Brayton made some big plays. We could make them play the way we wanted to play. That’s about as good as we’ve played this year.”

The Stars will have to capture that momentum and duplicate it.

“We’re back to work,” Hein said. “Hopefully the shot of confidence we got carries over. The nice thing is we have them here. That beats the heck out of going down there (where BNL has lost the last two by a combined 79 points), that’s for sure.

“It’s another good team, another quality team. Heidbreder is really good. He’s definitely a Division I player somewhere, and they have kids who post up. We haven’t played against a ton of guys who post up hard, and they have two. So we’ll have to defend them and Heidbreder on the perimeter.

“We have to be able to utilize the mismatches. We did a good job of that in the Jeffersonville game. It’s like playing NBA basketball, you have to figure out the best places to go and take advantage of it.”