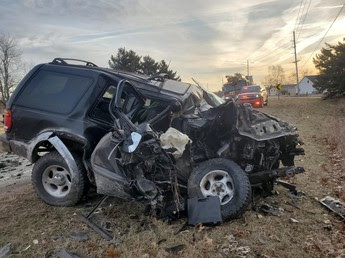 In both crashes, issues related to driver fatigue and inattention were found to be contributing factors. Fortunately, there were no serious injuries in either crash, including the crash where a Steuben County officer was struck by a passing vehicle.

According to Master Trooper Buell’s preliminary investigation, a black 2000 Ford Explorer driven by 39-year-old Fernando Fernandez-Perez, of Angola traveling westbound on State Road 120 and crossed left of centerline into the path of an oncoming 2019 Freightliner semi-tractor trailer driven by 66-year-old Albert Colten, of Stockton, California.

Master Trooper Buell says driver fatigue contributed to the Ford Explorer operating left of center, and it also showed that the semi-tractor took evasive action attempting to avoid a collision, but was unsuccessful.

Both vehicles sustained heavy damage and were considered a total loss. Fernandez-Perez sustained minor injuries and was treated and released at the scene by Steuben County EMS personnel. Colten was not injured.

The second crash, although separate from this first crash, involved a Steuben County Sheriff’s Department officer, Chief Deputy Michael Meeks, while he was assisting with traffic control duties related to the above crash scene.

Senior Trooper Chris Levitt’s investigation revealed that at approximately 9:15 a.m. Chief Deputy Meeks was out of his patrol car directing traffic at the State Road 120 and County Road 175 West intersection when he was struck by a passing 2018 Chevrolet Silverado pickup truck operated by Gary Todd Thompson, 53, of Middleton.

Chief Deputy Meek sustained a minor injury during this incident, was checked out by Steuben County EMS personnel and released from the scene.

Thompson was not injured, and his vehicle did not sustain reportable damage. Senior Trooper Levitt’s investigation revealed that driver inattention was a contributing circumstance in this incident, and Thompson was cited for disregarding a traffic control officer as a result.

“These two incidents are clear confirmation that driver fatigue and driver inattention while driving can have very real consequences,” says ISP Sergeant Brian Walker. “The Indiana State Police reminds all drivers of the importance to be well-rested before getting behind the wheel and always pay full attention while driving. Both crashes were avoidable and fortunately did not result in serious injury to the parties involved.”