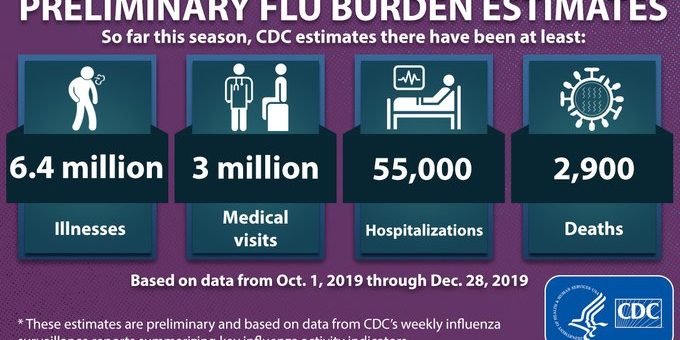 (UNDATED) – This flu season is shaping up to be one of the worst in decades, according to the United States’ top infectious disease doctor Dr. Anthony Fauci.

New data from the CDC released on Friday estimates that so far this season, at least 6.4 million people have caught the flu, 55,000 people have been hospitalized and 2,900 people have died.

In Indiana the flu is widespread. So far there have been 9 deaths from influenza-associated illness, according to the CDC.

This season so far has been particularly deadly for children, with 27 deaths reported through December 28. That’s the highest number of deaths at this point in the season since the CDC started keeping track 17 years ago.

Dr. Fauci said it’s possible this steep rise in flu activity could reverse itself soon, in which case the season wouldn’t end up being so severe.

“Hopefully this turns around and comes down, but if it continues on the trajectory it’s on, it’s not going to be good,” he said.

Flu seasons the past few years have been particularly brutal. The 2017-2018 season was unusually severe and the deadliest in years, according to the Center for Disease Control (CDC). The 2018-2019 season was the longest in a decade, lasting more than 21 weeks, per the CDC.

“The only thing predictable about flu is that it’s unpredictable.”

Even though the flu season is well underway, the worst could still be ahead, so the CDC advises everyone older than 6 months to get a flu shot.