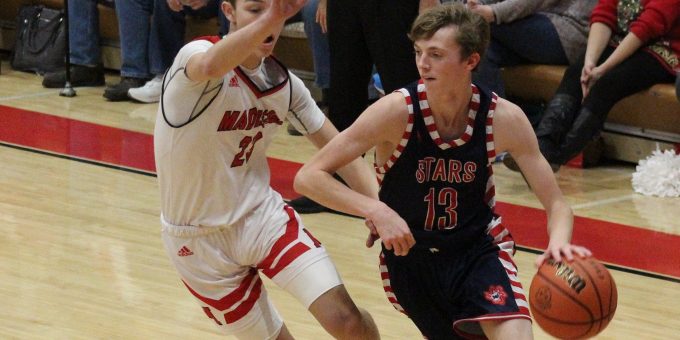 BEDFORD – When a new head coach, taking over a championship program, is described as a “young Brad Stevens” before the ink has dried on his contract, it demands attention. Granted, that’s part hyperbole and part hopefulness on the part of the hiring administrator.

Stevens is a high, almost impossible standard, the basketball guru who took Butler to a national title game before leaving for the Boston Celtics. Yet how many 28-year old guys could take a team with no returning starters and start 7-0? Perhaps, during the next decade, a fresh new hire will be described as a “young Garrett Winegar.”

Granted, that’s part magnification and part expectation. But after such a sizzling beginning, with a team now ranked No.5 in Class 4A, Winegar has raised the bar on what was expected when he was promoted from assistant to the new coach of the Warriors, who will entertain Bedford North Lawrence (6-5) on Friday night.

Warren Central is two years removed from its undefeated state championship under Criss Beyers, who is now on the sideline at Franklin Central. And it’s two coaches removed from that crown. Kristof Kendrick was hired first to fill the role, but three weeks later he left to take a job as a college assistant. Winegar was given his shot, and he hasn’t missed.

Surprising? A little. Winegar had the benefit of knowing his personnel after spending three seasons as a Beyers assistant. But when he was handed the baton of the program, he wasn’t anticipating 7-0.

“Definitely not,” Winegar said. “But they bought into what we were trying to do, both in keeping some things the same and some changes I was making. There was a lot of growth.”

Winegar absorbed knowledge from two of the best. While spending time on J.R. Holmes’ staff at Bloomington South, he learned structure and organization. Holmes, who once showed Winegar a practice plan from his long-ago days as a graduate assistant, is a master of that craft. From Beyers, he learned discipline, how to be hard and demanding but keep a good, caring relationship. “It was an accelerated learning curve,” he said.

The Warriors will feature junior guard Malik Stanley (averaging 21 points per game) and junior guard Sean Black (14.0) as the main assault weapons of an 84-feet, high-pressure, intense attack. They speed up to crack the comfort zone and break down the opponent.

“With their athleticism and speed, we won’t see anything like this all year,” BNL coach Jeff Hein. “It’s not even the same level. They just swarm them at you. They try to up the tempo of the game.”

The Stars are coming off their four-game, two-win performance in their own Danny Bush Classic, which included a pair of remarkable efforts from senior guard Brayton Bailey. He scored a career-high 38 points against Milan, then posted a triple-double with 25 points, 10 rebounds and 12 assists against New Palestine.

“As we went along in the tournament, we played better,” Hein said. “Milan was our worst game of the year, and New Pal was one of the best we’ve played.

“Brayton had a heck of a game. The Madison and New Pal games were his best, when he was moving the ball around. We’re so much better when we’re getting everyone involved.”

”Brayton is a really good player,” Winegar said. “If you let him get comfortable, he can really go off. And some of the role players are getting more comfortable.”

Winegar is familiar with several Stars. He coached against them in junior high. And he was almost their new coach, having been brought in to interview for the BNL position that eventually went to Hein. It’s hard to overlook 295 career wins compared to 0 when making that decision.

Zero is the number of times BNL has beaten WC. Of course that’s in one attempt. Last season, the top-ranked Warriors won 72-54, dominating the second half as Jesse Bingham scored 22 points and Stanley added 18. The outcome of the rematch will hinge on BNL’s ability to control pace and protect the basketball.

”Handling the ball will be critical,” Hein said. “The best way to slow the tempo is preventing the live-ball turnovers. If we don’t take care of it, it could be a really long night.”

Last meeting: Last year at BNL, the top-ranked Warriors pulled away in the second half for a 72-54 victory. Jesse Bingham had 22 points and Malik Stanley added 18 for Warren Central. McCall Ray totaled 13 points for the Stars.