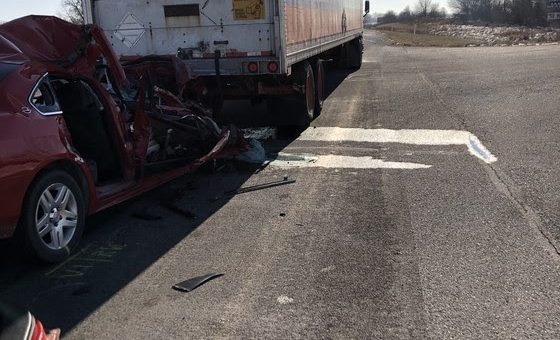 (KNOX CO.) – Today at approximately 12:30 p.m., Indiana State Police responded to a two-vehicle crash on US 41 north of Gauger Road that claimed the life of an Oaktown woman.

According to police, 62-year-old Karen Leah Burr, of Oaktown, was driving a 2011 Chevrolet Impala southbound on US 41 approximately 80 feet north of Gauger Road when her vehicle collided into the rear of a 2017 Freightliner tractor and trailer.

Officials say that the tractor was having mechanical issues and the driver was traveling in the driving lane at approximately 10 mph prior to the crash.

Burr was pronounced dead at the scene by the Knox County Coroner.

The driver of the tractor-trailer, 58-year-old Albert Javan Riddle, Jr, of Chicago, IL, was not injured during the incident.