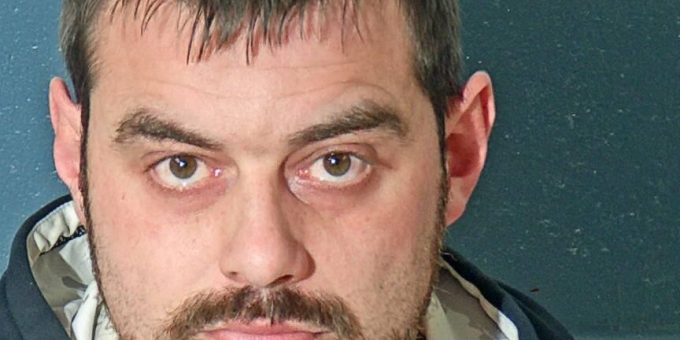 (BEDFORD) – A Heltonville man was arrested Saturday night on a felony warrant charging him with rape, sexual battery, residential entry and a misdemeanor charge of criminal trespass.

The caller told police that on the evening of October 23rd around 11:30 p.m. she woke to use the bathroom and when she walked into the hallway she found a male standing there staring at her. She told police she screamed and the man ran out the back door towards the woods.

Police say nothing was missing from the home and there were no signs of forced entry.

The woman told officers the man was her ex-boyfriend Joshua Sollman and she believed he still had a key to her home.

The woman told police Josh was “very possessive” when they were dating. The couple ended their relationship in August. She told police that Josh had raped her on October 12th and then became very emotional.

The woman told police that on October 12th she and Sollman had been drinking with friends and he drove her home because she had consumed too much alcohol. Once home, the woman told police she felt ill and went to lie down. After relentless inquiries from Sollman, she agreed to allow Sollman to lie in her bed with her with a separate blanket.

While crying the woman told the officer she remembers lying there while Sollman raped her. After the alleged incident she asked Sollman to sleep in another room. In efforts for Sollman to vacate her home, she voluntarily drove him to his car in Avoca. According to her, Sollman continually apologized for the incident and said that he regretted his actions. Sollman indicated to her that he was impaired and was unknowing of his actions. Sollman then allegedly asked for forgiveness.

During an interview with a detective, the woman told police she started dating Sollman in November 2018. They ended their relationship in June or July 2019. However, their friendship remained with an agreement of no sexual activity between them.

The woman was able to provide police with exchanged text messages with Sollman indicating admittance of taking advantage of the woman.

The woman also provided police with messages that Sollman sent friends via Facebook admitting what he had done.

During the investigation, police searched Sollman’s cell phone. Police were able to retrieve recently taken pictures on the same date as the alleged rape.