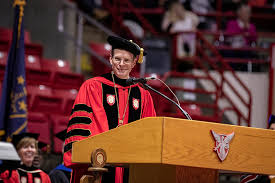 (MUNCIE) – Standing before a gathering Saturday of new alumni and their families during Fall Commencement, Ball State President Geoffrey S. Mearns urged new graduates to help create a better world by never forgetting the enduring values embraced by the University.

“As you leave our campus, and as you begin making your first major life choices as young graduates, I hope that you will reflect on the aspirations articulated in our University’s mission statement,” he said. “We believe that we have prepared you for a fulfilling career, and we hope that we have inspired you to lead a meaningful life.”

President Mearns told the cap-and-gown clad new graduates that they would have to decide on their own what it means to have a fulfilling career and meaningful life, and those answers will almost certainly evolve and grow with the passage of time.

“I also encourage you to pursue a life of meaning. Life is a gift — a precious gift. And to lead a meaningful life, you should share that gift with people who need you.”

President Mearns explained that to lead a meaningful life, the new graduates must also embody certain core values, such as the enduring values articulated in the Beneficence Pledge:

“Through your character and commitment, please help us to create a world that is more peaceful and more just,” President Mearns said. “We believe in that brighter future, because we believe in you.”

During the two-hour event, the University conferred more than 1,500 degrees.

Attendees also heard from Dr. Freeman A. Hrabowski III, president of the University of Maryland, Baltimore County (UMBC), who gave the commencement address, “The Power of Stories.”

“My message, which is based in part on advice I received from an impressive group of Ball State seniors, focuses on the importance of graduates knowing and understanding their own stories,” said Dr. Hrabowski, who received an honorary doctorate of science from the University.

He was recognized for many outstanding achievements, such as his pioneering STEM work at UMBC, which is now among the nation’s leading sources of African American PhDs in science and engineering.

He provided three key messages during his Commencement address: