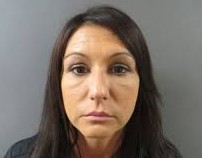 (POSEY CO.) – Indiana State Police initiated a criminal investigation in August after the discovery of missing funds from the Posey County Sheriff’s Office.

The audit also revealed that 42-year-old Trinity Tucker, of Mt. Vernon, was the secretary for the Posey County Sheriff’s Office and was responsible for the bank account during the time funds were missing.

Further investigation revealed Tucker was responsible for collecting all money coming into the sheriff’s office and for making all deposits into their bank account.

Between January 2015 and December 2018, Tucker allegedly stole $18,621.37 from the Posey County Sheriff’s Office. Tucker resigned from her position in February 2019.

Thursday at approximately 3:45 p.m., Tucker was arrested after surrendering to Indiana State Police at the Posey County Jail where she posted bond and was released.