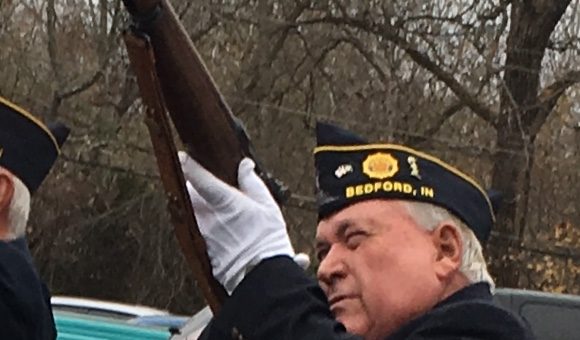 Parkview’s celebration was held this morning in the Parkview Primary Gym, along with students from Parkview Intermediate in a joint program for Veterans.  The National Anthem was sung by Bedford Mayor Shawna Girgis.

Students wrote essays that were read to those in attendance.

What is Veterans Day?

“On Veterans Day, Americans honor the people who have served in the United States Military. These people were honored for their service in times of war and peace. This day is also a time to remember the people who have died for America. Veterans Day takes place on November 11th, at 11 a.m. At that time many people share a moment of silence to remember the fallen soldiers. Throughout the country, parades are held to pay respect to the people who either have fought or are still fighting for the freedom that Americans have today.”

“A veteran might have served in the military either as a soldier or as a doctor or nurse.  Many Veterans have died while fighting. Other veterans were wounded but were able to return home. Today they are more than 25 million living American Veterans. Veterans have died while fighting to keep peace and have fought in many wars over the years. We are very proud of our Veterans, our flag and our country.”

Following the narrative students sang “ This Land is Your Land” and “Three Chairs for the Red, White, and Blue”.

Then students talked about Armistice Day.

“The United States was involved in World War I. This war ended in 1918 and more than eight million soldiers died during the war. World War I, ended officially on November 11, 1918, at 11 a.m. Germany signed an armistice, or agreement to stop the fighting. President Woodrow Wilson made November 11th a holiday, It was called Armistice Day. Each year on that day, Americans remembered the sacrifices that soldiers had made during World War I. Over the years, America was involved in many other wars to protect our country. In 1954 President Dwight D. Eisenhower worked with Congress to change the name of Armistice Day to Veterans Day.

November 11th became a day dedicated to honoring all American Veterans who have served their country during times of war and peace. Thank you, Veterans, for helping make America the land of the free. Over 19 students took part in reading the reflection on Veterans and Armistice Day. “

Students then sang, “This is my Country!”

Fifth graders read their reports from the Essay contest.

Since World War I, the red poppy has been a symbol for veterans. A terrible battle took place on Flanders Field in Belgium during World War I. The ground in this area held many poppy seeds.

After the battle, the red flowers bloomed and covered the field. Today, we are celebrating Veterans Day at this program. We want to say thank you to our Veterans.”

Following this narration the veterans from every branch of service to be honored.

The Tomb of the Unkown Soldier:

The students sang “Taps” followed by Mr. Jim Kirkman Playin Taps on the trumpet. Then, a moment of silence took place for remembrance to all those who have died to fight for our freedom.

“It’s good to serve in the military. Filled my heart to be here today,” said Cheryl Langdon who served in the Army and attended the Parkview program today.

Dwight Jones, Heltonville reflected on his military service. Jones served from 1952 – 1956 during the Korean War in the United States Air Force. Jones also served four more years inactive in the military. He was a mechanic who worked on military bases in Illinois, Ohio and Puerto Rico.

“I am proud to serve my country,” Jones added.

Then, this afternoon Fayetteville Students conducted their Veterans Day Program with the Presentation and Posting of Flags by Fayetteville Cub Scouts Carson Lyons and Blake Beeson.

The National Anthem was sung which was led by Music Teacher Mr. Morgan. The Pledge of Allegiance then was led by Fayetteville Cub Scouts Carson Lyons and Blake Beeson.

Ethan Holsapple, Olivia Dillman, Issac Dillman, Samantha Nusbaum, Kelsey Gulley read essays on Veterans Day. Then, the students led in excitement with musical performances of “ You Are Our Heroes”, “ This is My Country”  and “ Oh I Love America”. Following the songs, each branch of military men and women were honored.

Then, everyone sang “ America The Beautiful” and afterward there was a moment of silence and Bedford-North Lawrence High School Student Aaron Burgess played “Taps” on the trumpet.