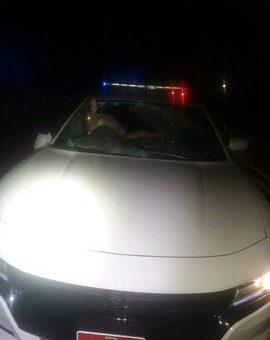 (BLUFFTON) — An Indiana state trooper had an unwanted passenger after a deer crashed through the windshield of his patrol car.

The crash occurred near Bluffton in Wells County, 25 miles south of Fort Wayne. Walker says drivers need to keep an eye on deer at this time of year.