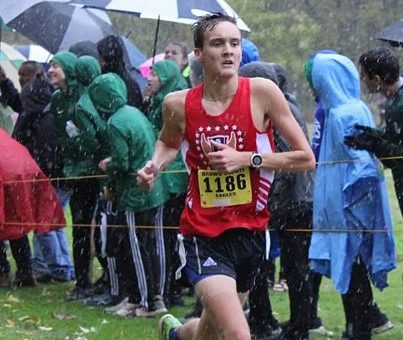 (NASHVILLE) – Bedford North Lawrence’s Cooper Holmes ran his final race, and Grace Tanksley had the most fun possible in the mud, during the IHSAA semistate race at Brown County on Saturday.

Holmes capped his high school career by finishing 42nd in the field in 16:56.1. The top 10 individuals who were not members of the six state qualifying teams advanced to the state championship meet in Terre Haute on Nov. 2.

Holmes missed that cutoff by 23 seconds as Shakamak’s Damon Kesler grabbed the final spot in 16:32.6.

“I ran the best I could today,” Holmes said. “I got out decent, but it just wasn’t enough. The course was in rough shape but the times were better than I thought they were going to be.”

The 179 competitors had to race through constant rain and slog through the muddy 5-kilometer course.

“I felt Cooper ran his best race I have seen him run the last three years, BNL coach Jon Calhoun said. “Yes, the conditions were horrible, but he battled every which way to give him a shot at making it to state.”

“It stings knowing I worked very hard for four years and still didn’t make the cut, but it just wasn’t God’s plan for me,” Holmes said. “But I’m beyond grateful for my coach, teammates and people that have supported me.”

“Cooper should be proud of the hard work he put in to get this far,” Calhoun said. “He improved every aspect of his running this past year by gaining more speed, more endurance and most importantly the mentality of racing.

“He is one of the hardest working and determined individuals I know, which is a trait that will make him successful in his future endeavors.”

Tanksley, a sophomore attempting to become BNL’s first state qualifier since 2010, crossed the line in 117th place with a time of 22:16.6. She embraced the conditions, rather than bracing for the worst.

“It was tough running through the mud but it was the most fun I have ever had during a race,” she said.

“She had a big smile on her face, and that was the most important thing for her,” BNL coach Jill Vance said. “We knew going in we wouldn’t get the times we were trying to chase because of the weather. So she went out to enjoy it and have a good time.”

Columbus North won the team crown with 57 points while Edgewood star Annalyssa Crain was the runaway individual winner in 18:02.6.