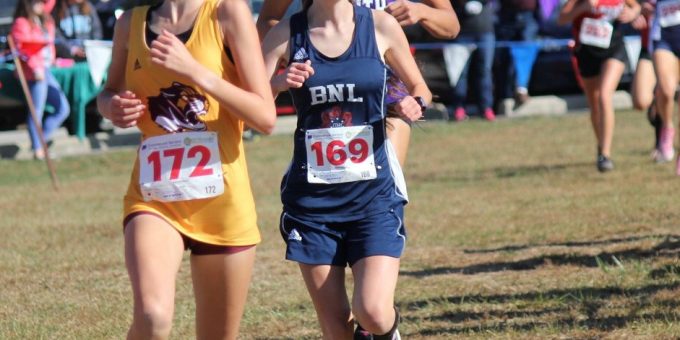 (BEDFORD) – As a freshman, young Cooper Holmes wrote himself a motivational note, one he has read periodically since as a goal reminder. It asked a simple question: “Have you made it to the state yet?”

He’s down to his last chance.

Bedford North Lawrence’s senior star will race for individual glory and history when he competes in the IHSAA semistate at Brown County on Saturday. BNL sophomore Grace Tanksley will compete in the girls event, both of them chasing invitations to the state championships.

The top 10 finishers who are not members of state-qualifying teams (the top six teams in the field of 20) will advance to the final stage of the state tournament series on Nov. 2 in Terre Haute. In a runaway herd charge of 180 competitors (from four regionals), that’s a tough task.

Holmes has a definite shot at fulfilling his four-year dream. Last year, the 10th individual spot time was 16:21 – faster than the 16:39.21 he clocked in last week’s regional. But the Brown County course is a flat, fast, speed trial rather than an elevation-change test of endurance over 5 kilometers. Times there are generally faster. And Holmes is spurred by the challenge.

“I’m going to go there to compete,” Holmes said. “Anyone that knows me, I’m a really competitive person. I live for competition. So I love it. I’m going to run to the best of my ability. I’ll have to have the race of my life. This would mean the world to me.”

Another factor is experience. Holmes has run seven races on the course, including last year’s semistate (when he got left behind in the mad-dash start and finished 130th in 18:05.2). He’s a much better, craftier runner now.

“His chances are pretty good, if he runs the way he can,” BNL coach Jon Calhoun said. “He has to beat some people, improve from where he was last week, but with his mindset he can do it.

“He really needs to get in front of that pack so he doesn’t get bogged down. It’s like a tunnel effect. If you get behind, you can never come back. He knows when to go, he knows what he has to do to get in the proper spot.”

“The key is to get in good position at the start,” said Holmes, who plans to charge to the front as quickly as possible during the first 1,000 meters. “It’s a wide start, but it narrows really fast. You have to get out quick and not get stuck behind a bunch of people.”

BNL’s last qualifiers for the states finals was the 2012 team.

Tanksley faces an uphill battle on a course without hills. She posted a career-best 21:00.30 in last week’s regional. But if history’s trends hold, it will take a time near the 19:20 mark to advance to the finals.

She’s not worried about that. Her goal is to slash 30 more seconds off her time (which would be a minute better than her time of 21:34.1 in the Brown County Invitational earlier this season)..

“This is all about time, trying to hit a new time goal,” BNL coach Jill Vance said. “Only the top 10 go forward, and realistically I’m thinking that will be sub-19 time wise. So it’s not realistic for this year.

“I’d like for her to aim at 20:30. That’s not an insignificant drop, and given the level of competition, with the overall field boost in speed, I don’t think it’s unreasonable.”

Tanksley took Vance’s time quest quite literally last week, hitting the 21:00 mark that was her goal. She will take the same approach.

“I don’t want to leave anything behind,” she said. “It’s fast and flat. I want to even out my splits (mile pace) this time. Last week I went really fast the first mile.”

BNL’s last state finalist was the girls team in 2010.