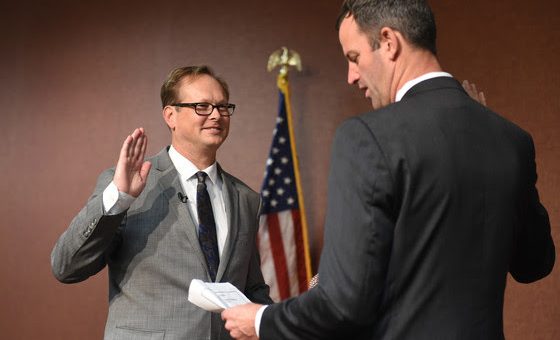 (INDIANAPOLIS) – Stephen Cox was sworn-in as the new Indiana State Fire Marshal today among a group of firefighting leadership from around the state.

The brief swearing-in ceremony was held at the Brownsburg Fire Territory Training Facility and was attended by firefighters and EMS officials from across the state. Cox officially began his role as State Fire Marshal on Monday.

“Chief Cox brings great experience, leadership and vision to the Indiana Department of Homeland Security,” Gov. Holcomb said. “I know that as the state’s fire marshal he will enhance public safety in the state of Indiana and continue to build partnerships with first responders and all Hoosiers.”

Cox takes over for Jim Greeson, who served as Indiana State Fire Marshal for 11 years and retired in September.

The fire marshal leads the Indiana Department of Homeland Security Division of Fire and Building Safety. The division investigates suspicious fires, promotes fire prevention and enforces fire and building safety codes in all public buildings, among other duties.