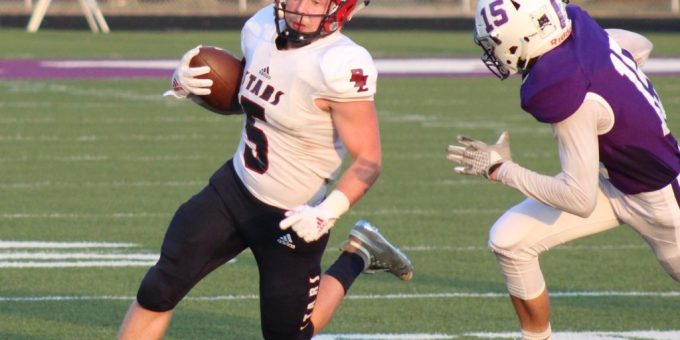 (BEDFORD) – Bedford North Lawrence, brazen and a little desperate with a three-game losing streak, is going to attempt to steal a victory, right in front of a veteran police detective.

The Stars, needing momentum for the start of the four-team Class 5A sectional, will conclude the regular season with a road trip to Jeffersonville. The Red Devils (3-5) are under the direction of new coach Isaac Parker, who solves cases as a lieutenant on the city detective force during the day and hopes to solve BNL’s triple-option attack on Friday night.

Parker, a 1999 Jeff grad and former defensive lineman with the University of Louisville, served as an assistant for four seasons before getting his new badge. His primary focus was instilling discipline and restoring pride in a team that fell to 2-8 a year ago.

The numbers are trending in the right direction. The roster went from a meager 39 (on the varsity) to a whopping 108 (in four grades). The wins are up. The excitement level is returning to a program that hasn’t won a sectional since 2007.

“This means a lot to me,” Parker said. “Jeffersonville is home. It’s where I’m raising my family. It’s always been home. So I’m grateful for the opportunity.”

The Devils have won two straight and scored 89 combined points (against Madison and Jennings County) while doing that. Senior running back Isaac Findley, nearing 1,000 yards for the season after missing the first four games, rumbled for 167 yards and three TDs last week against the Panthers.

“As always, they’re a pretty good team,” BNL coach Steve Weber said. “By no means are we in a position to take anyone lightly. They can run the ball, and the quarterback (Lance Bailey) has a great arm. Offensively they will cause us some issues.”

The Stars (2-6) could use a jolt, especially with the postseason on the immediate horizon. They are viewing this as a chance (a last chance) to solidify all the mismatch pieces – thanks to injuries and shifting personnel – into a solid unit.

“Not only is it for momentum going into the sectional, but it’s against a possible sectional opponent,” Weber said. “We definitely have to look good, compete, and hopefully come out on the winning end. It’s a big game for that.

BNL displayed potential for a sectional run last week at Floyd Central, battling the Highlanders in the rain before falling 29-21. Running back Skyler Bates, quarterback Dalton Nikirk and receiver Derek Hutchens had big-chunk plays. The question now is whether the Stars can slow down Findley and churn out yardage on a consistent basis.

“BNL is the same as in years past,” Parker said. “They’re extremely well coached and disciplined, very physical. We have to play assignment football and do our jobs.”

Last year, BNL endured a 75-minute pregame lightning delay to storm past the Red Devils 34-12 with 20 fourth-quarter points. McCall Ray was the catalyst with three rushing touchdowns. That was BNL’s first win at Blair Field since 2010.

The teams could meet again in the sectional final on Nov. 8. But first, the Stars must win a rematch with the Highlanders in the sectional opener, while the Red Devils must stop New Albany for the second time this season.

Last meeting: Last year at Jeffersonville, the Stars scored 20 points in the fourth quarter to prevail 34-12. McCall Ray ran for 108 yards and 3 touchdowns while Drew Shoufler caught 6 passes for 124 yards and a TD for BNL. Isaac Findley had an 80-yard TD run for the Devils.

Game notes: Parker is the third head coach for the Devils in three years. He took over for Brian Glesing, the former Floyd Central coach who is now at Paoli.