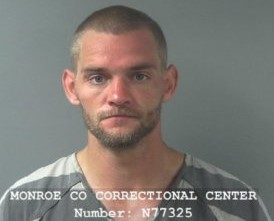 (BLOOMINGTON) – A man is behind bars after a woman woke up and found a stranger in her bed naked and rubbing on her.

Shortly before 6 a.m. Saturday, police were called to an apartment complex in the 2000 block of North Walnut Street after a report from a woman saying there was an unknown naked man in her apartment.

When officers arrived they heard someone behind the privacy fences. As police approached the building, Goodnight stuck his head out and told police that they let him in.

Goodnight also told police that he had walked from Brooklyn, Indiana to Bloomington and arrived in town around 9 p.m. on Friday. He says he fell asleep in the grass at the Motel 8. When he woke up he began knocking on apartment doors to see if he could take a shower. He says one of the girls in the apartment let him in and after taking a shower he got dressed and left.

The woman told police a different story. She says she was asleep when she woke up to a naked man in her bed and rubbing her arms, back and buttocks.

She was startled awake and asked who he was. She says he replied by saying, ‘I’m Corey and you let me in.’

The woman got out of bed, left the room and woke up her roommate and then called the police. They hid in the bedroom until police arrived.

In the bathroom, police found Goodnight’s wallet as well as the shower and floor still wet from use.