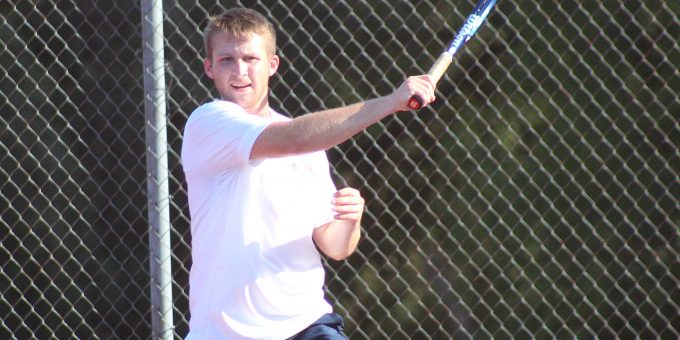 (BEDFORD) – Bedford North Lawrence’s Wyatt Scherschel and Cameron Gratzer, playing with quiet aggression, were on top of their games.

They might not holler and scream after points, but they were loud in terms of style and substance on Tuesday afternoon, rolling to an impressive doubles victory as the Stars slammed Scottsburg 5-0.

Scherschel and Gratzer blasted Covin Ray and David Gaffney 6-0, 6-1 at No.1 doubles, setting the tone for BNL’s second straight win.

“Cameron and Wyatt are playing great, they were fun to watch,” BNL coach Donnie Thomas said. “They’re moving well together, serving well, they’re cleaning up at the net. They’re the quiet team, the one that gets the other team down when they just touch rackets after a good point.”

“I enjoyed watching them tonight,” Thomas said. “We played very well. That’s two matches in a row Graham has come back from being behind a little bit. That’s what we need out of him. He’s got some fight in him.”