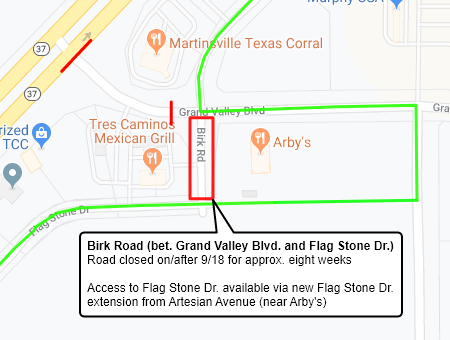 (MARTINSVILLE) – Additional changes are coming this week to the commercial and retail area near Grand Valley Boulevard in Martinsville.

On or after Wednesday, September 18, Birk Road will close between Grand Valley Boulevard and Flag Stone Drive for necessary work associated with the construction and eventual tie-in of the new Grand Valley Boulevard overpass. The section of road will close for approximately eight weeks while crews complete sanitary sewer relocation, paving, and sidewalk and drainage installation.

The speed limit in the State Road 37 construction zone between State Road 252 and Ohio Street remains 45 mph and drivers are urged to slow down, use caution and drive without distractions through the area.