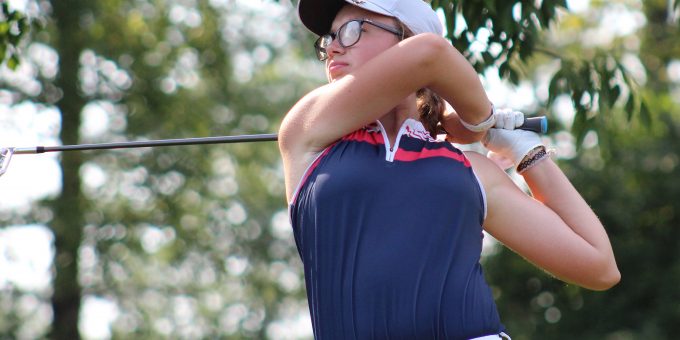 (BEDFORD) – With the postseason tournaments on the near horizon, Bedford North Lawrence is starting to peak at the perfect time.

The Stars carded their best nine-hole score of the season on Thursday afternoon, firing a solid 166 on the back nine at Otis Park to top Brownstown (222) by 56 strokes.

Olivia Sanders earned medalist honors with a 3-over 38 that included a birdie on the tough 15th hole, and Addyson Bailey added a 39 as BNL took a significant stride in its preparation for the sectional on Sept. 21.

“This is absolutely what we’ve been looking for,” BNL coach Aaron Sanders said. “We’ve been knocking on the door, and we had some girls come through. It’s where we want to be heading into tournament time.”

His daughter avoided any huge mistakes, as did Bailey (four bogeys).

“Everything kind of clicked,” Sanders said. “I figured out that 3s, 4s and 5s on the scorecard, you won’t shoot something awful.”

Ashley Chase added a 41 and Kennedy Blair chipped in a 48 for the Stars.

“That’s what we needed, somebody to get under 50, and Kennedy has taken ownership of that lately,” Sanders said of his key fourth scorer.

Peyton Ault paced the Braves with a 49.

The Stars will compete in the Hoosier Hills Conference tournament at Madison on Monday, the start of a big week. Before that, they will play in the Franklin Central Invitational at Smock Golf Course on Saturday.

“I think we can compete,” Olivia Sanders said. “It felt like we were out of the loop for a while, but now we’re really back on it.”