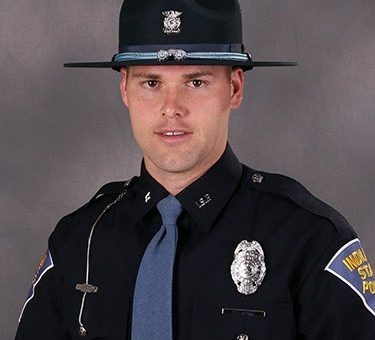 (BLOOMINGTON) – Indiana State Police Superintendent Doug Carter announced the promotion of Trooper Gabriel Bault to the rank of Corporal. Corporal Bault will serve as the District Duty Officer, overseeing various line command and administrative duties at the Bloomington Post. Bault will also oversee the functional supervision of Bloomington District operations and delegate assignments to troopers working in the field.

Originally from Patricksburg, IN, Corporal Bault is a 2007 graduate of Owen Valley High School. He graduated from Indiana University in 2014 with a double major in Criminal Justice & Sociology, along with a minor in Norwegian. Bault has attended Indiana State University from 2015-2019, working toward his Masters of Science, criminal justice, and criminology degrees.

He is currently in the process to be selected for the Doctoral program at Indiana University, which would start in the Fall of 2020.

Bault is married and has two children.