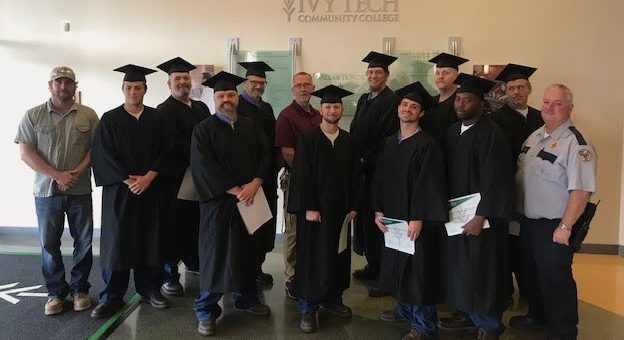 The welding class ran five days a week for four weeks. At the graduation Deputy Warden Kevin Gilmore spoke on behalf of WVCF. He congratulated the offenders on their accomplishment and encouraged them to continue the path they are on to a successful re-entry. Mr. Gilmore also thanked Ivy Tech for their continued efforts to ensure the program is a success!

When Graduate Sean Swonger was asked why he first signed up for the class, he stated he wanted to find a good job prior to release to provide the finances he needs to support his family. He also mentioned before Casework Manager McLaughlin posted the flier, he had no job lined up at all. Swonger then went on to tell how his passion to work hard in the program was ignited when a representative from a local business spoke with the class about the opportunities they could offer them. At the end of the interview Swonger stated, “I feel the class was worth the time and full of opportunity!”

As a part of Gov. Holcomb’s Next Level Agenda , the program trains men at the Wabash Valley Correctional Facility how to weld with the ultimate goal of aligning them with gainful employment in the industry upon release. Welding is an exceptional pathway for released offenders, providing higher pay rates and stable employment upon re-entry. Currently Indiana’s correctional facilities house about 27,000 offenders—and more than 90 percent of them will eventually be released back into Hoosier communities.