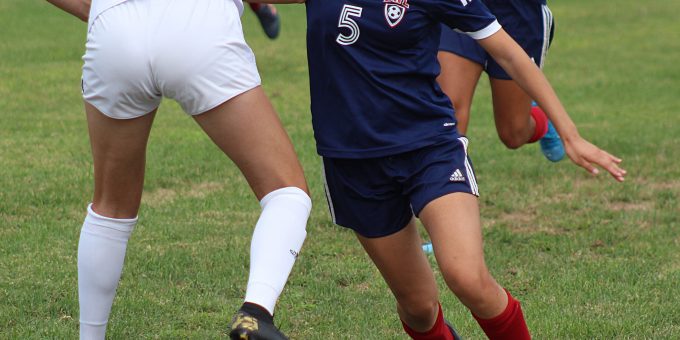 (BEDFORD) – New Albany knocked on the door, then kicked it down and stormed through.

After applying constant but unrewarded pressure in the first half, the Bulldogs erupted for six goals in the second to conquer Bedford North Lawrence 6-1 on Saturday afternoon. Emma Lopp recorded four goals, erasing BNL’s quality work during the first 40 minutes.

BNL (0-3, 0-2 in the Hoosier Hills Conference) couldn’t generate a counter attack to New Albany’s relentless assault. Like Red said in Shawshank Redemption, it was a lesson in geology. “That’s all it takes really – pressure . . . and time.”

“We didn’t get away from our game plan,” New Albany coach Drew Stein said. “In the first half we kept it on our end of the offensive field, so we instilled in them not to panic. We couldn’t make up the deficit all at once.

“We kept our composure. We were knocking on the door so it was just a matter of time before we got one in.”

BNL only got one, but it was the first one. Lois Kinser poked home a rebound after a corner kick pinballed in front of the net with 26:13 left in the first half. The Stars dodged every New Albany shot until intermission.

New Albany wasted no time in responding in the second half. Lopp got her first at 37:39, settling a long pass and sniping a shot off BNL goalie Hannah Riester’s outstretched hand.

Taylor Treat put the Bulldogs in front at 35:22, and Grace Barber rifled a shot from the left wing to the right corner of the net for a 3-1 lead at 32:21.

“They were giving us so much pressure back there, and I tried to drop another girl on the back line,” West said. “We hadn’t worked on it much, so I take responsibility for those goals. We got spread out, and when we’re one-on-one with the goalie, we don’t have a chance.”

Most teams don’t. BNL had only one other shot on goal after its score.

The Stars will return to action on Sept. 10 against Columbus East.