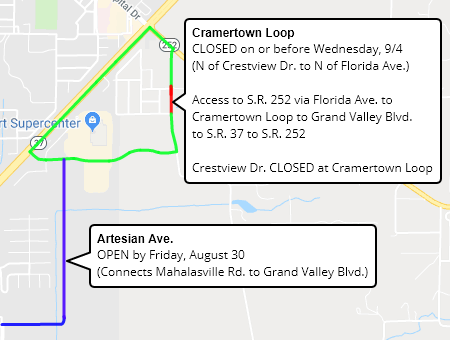 (MARTINSVILLE) – A number of traffic changes associated with Section 6 of I-69 are planned in Martinsville over the next couple of weeks.

This closure will allow crews to complete the tie-in of the newly-aligned section of Cramertown Loop to the existing roadway. Once the tie-in is finished, work on Artesian Avenue, Cramertown Loop, and the Grand Valley Boulevard extension will be complete and all will be open to traffic.

Asphalt paving is now complete on newly-constructed Artesian Avenue, which connects Grand Valley Boulevard to Mahalasville Road. The road is expected to open to traffic by Friday, August 30, weather permitting.

Crews have been completing curb and gutter work along Cramertown Loop in preparation for paving scheduled this week. The current closure on Cramertown Loop will move north on or before Wednesday, September 4, weather permitting, for tie-in of the newly-aligned roadway to the existing road.