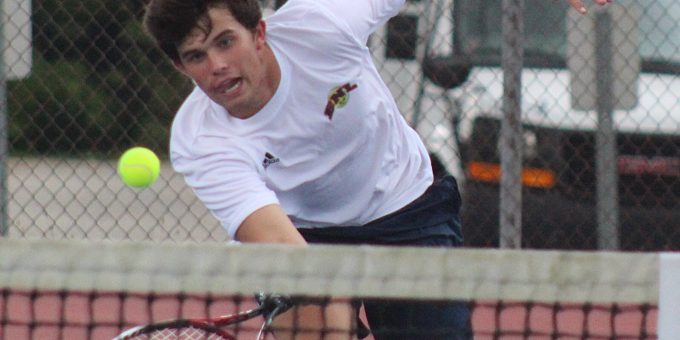 BEDFORD – Bedford North Lawrence beat the rain and Linton on Thursday afternoon. The latter would not have happened without the former.

As afternoon showers bore down on the courts, the Stars wrapped up a 3-0 victory over the Miners, sweeping the three singles matches. Both doubles were early in the second sets when play was halted.

BNL’s dominance was the key to the quick conclusion. Adam Tlustek recorded a 6-0, 6-0 win over Grant McGill at No.1 singles, Cameron Gratzer was equally efficient with a 6-0, 6-0 conquest of Carson Brown, and Konley Woodward carded a 6-0, 6-2 win over Caden Place at No.3.

“They needed something like this,” BNL coach Donnie Thomas said. “We have some good teams coming up. Our singles did real well, they kept the ball in play and showed some diversity on shots.”

Cade Provo and Wyatt Scherschel owned a 6-2 win in Set 1 at No.1 doubles, while Steven Graham and Graham Turner had a similar result at No.2 before the rains made the asphalt courts unplayable.

BNL will host Borden, Bloomfield and Madison in a four-team tournament on Friday night.