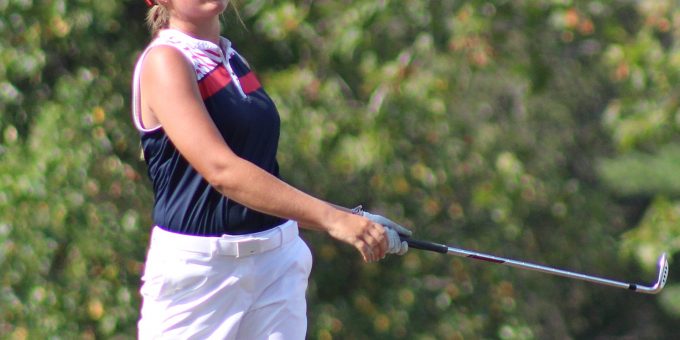 BEDFORD – Olivia Sanders carded a crisp 2-over 37 while leading Bedford North Lawrence to a nine-hole victory over rival Bloomington South on Thursday afternoon at Otis Park.

Sanders posted 7 pars, with only slight missteps for bogey on holes 11 and 15, to earn medalist honors as the Stars fired a team total of 172. South totaled 209. Addyson Bailey added a solid 39 for BNL.

“That’s where we need her to be,” BNL coach Aaron Sanders said of his daughter. “She was really solid, she kept the ball in play and hit a lot of greens.”

Bailey added six pars during her round, with a bobble for double-bogey on the 16th hole. Ashley Chase added a 43 and Kennedy Blair completed the BNL scoring with 53.

The Stars played the final three holes in the late afternoon rain, which created a learning experience.

“You have to learn how to play in that stuff,” Sanders said. “Somewhere down the road, we will beat some teams because we know how to handle it. It’s good to play in it.”

Kate Lewis paced the Panthers with a 47.

BNL will compete in the Floyd Central Invitational at Old Capital Golf Club in Corydon on Saturday.﻿