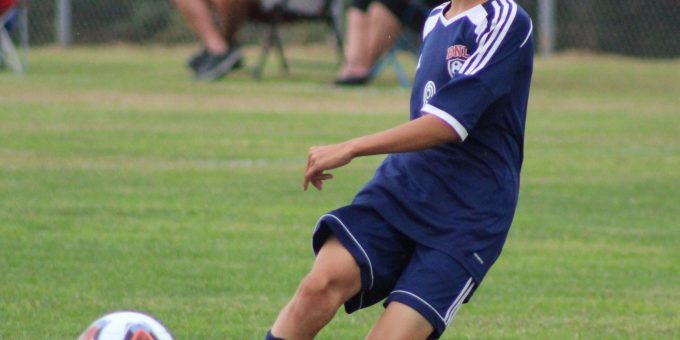 BEDFORD – Sign of good day? When a header from point-blank range hits the post, bounces right back, and the rebound is uncontested. That’s a good day. That was Josh Anderson’s day.

Nobody really knows if 14 is a program scoring record. Let’s hope so. That’s too much punishment for any opponent to absorb. The Bluejackets (0-2-0), with only 13 players on their roster, have now been outscored 22-1 in two matches.

Most of the time, Mitchell seemed like it was playing a man down, with the ball spending little time in its half of the pitch. The Stars (1-1-0) could do whatever pleased their fancy. And they did as much as possible to limit the damage, short of stopping all shot attempts. The constant rain didn’t even slow them down.

“We came out really well, moved the ball, did everything we should have done,” BNL coach Logan Jackson said. “Our ball movement in the final third of the field, and scoring, was really good. We needed that.

“It was a tough game like that. We just tried to possess the ball, give them a pass limit, and they did a good job. Overall, this was probably good for us.”

Everybody had a hand – well, in soccer, everyone had a foot – in the outcome. Billy Cline started the scoring at 30:48, and Jacob Kolk tallied 74 seconds later. Lakota Terrell took a pinpoint pass from Cline for a goal at 27:51, and Anderson got his first less than a minute later.

Anderson’s double-header – the first off the left post, the rebound header into the net – was his second goal, and his third was the final tally.

Danny Cline added two assists, as did Terrell. The Stars saw the return on investment from practice situations.

“We were going to the ball, keeping after it,” Anderson said. “This is going to help us for the tougher teams, it gives us some more confidence.”

BNL had a whopping 25-2 advantage in shots. Mitchell goalie Landon Woods had to feel like a helpless target.

“Overall I was pretty happy,” Jackson said. “We got guys in new places, tried some new things out. It was definitely a confidence booster.”

The Stars will host Floyd Central on Saturday.