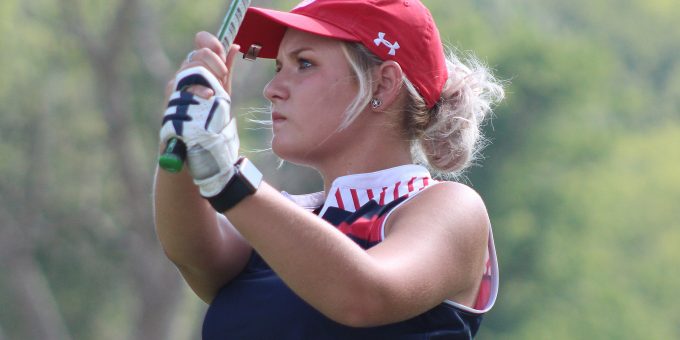 (BEDFORD) – Home was hot, and sweet, for Bedford North Lawrence.

The Stars, after opening the 2019 campaign on four of the toughest golf courses in Southern Indiana, made their season debut at Otis Park and topped New Albany 175-201 on Monday afternoon.

Now Otis can be difficult when she’s in the mood, and the grande dame is in hardscrabble form from a lack of rain in recent weeks. BNL’s Addyson Bailey and Olivia Sanders were on her good side, firing 4-over 41s on the front nine to share medalist honors.

Their secret was avoiding any wrath of huge numbers. Bailey had four bogeys and 5 pars during her consistent round, while Sanders birdied the par-5 fifth hole during her tour.

“We’ve struggled all season,” Sanders said. “This was the breakthrough.”

Ashley Chase, the third junior in BNL’s lead trio, birdied the second hole and fired a 43. Samantha Biel capped the scoring with 50.

“It was good to get back home,” BNL coach Aaron Sanders said. “We’ve played a tough stretch of golf courses. Our putting wasn’t very good from a lot of our players, and you’d think, on our home course, it wouldn’t be a big issue. But it looked like everyone was hitting it well off the tee.”

The Bulldogs almost didn’t make the trip. School policy dictates a cancellation of events when the heat index rises about 105. Officially, that number was 106, but because New Albany was going north to play, the team was allowed to travel. Perhaps the Bulldogs thought a trip to Bedford was equal to the North in the Game of Thrones?

BNL will return to action on Tuesday at Seymour.