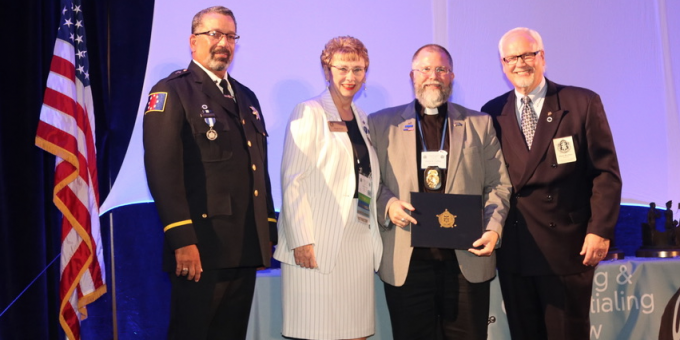 (INDIANAPOLIS) – Indiana State Police Department Staff Chaplain, Father Daniel Coffey, earned a prestigious Diplomate Credential last week from the International Conference of Police Chaplains (ICPC) at its annual training seminar which was held in Wichita, Kansas.  He is one of only about 55 to have ever received this credential, since the inception of the ICPC in 1973.

Coffey has served as a police chaplain since 1993 when he began his service with the Fort Wayne Police Department.  In 2006, he was appointed to the Indiana State Police to serve in the same capacity.  In July 2001, he received the Wilbert Cunningham Award for Excellence in Law Enforcement Chaplaincy from then Indiana Region of ICPC, which has now expanded to Region 4, and is comprised of Indiana and surrounding states, including Wisconsin and West Virginia.

In October 2001, Coffey was deployed via ICPC to the World Trade Center to assist the Port Authority Police Department following the terrorist attacks of 9/11.  In 2004, he was awarded the Law Enforcement Oscar Award for Outstanding Achievement and Service by the Fort Wayne Police Patrolman Benevolent Association.

Police chaplains are a resource for their departments and communities by providing stress management and community relations through emotional and spiritual support whenever invited. They primarily provide support to police and other emergency responders, but also to victims and their families at death investigations and other critical incidents.

ICPC is a professional organization providing training and networking, and is comprised of as many as 2,500 Chaplains representing many religions from up to 28 different countries.  It offers five credentialing levels:  Basic, Senior, Master, Diplomate and Fellow.  Coffey has exceed the continuing education requirements for the Fellow, and may be able to achieve that level after completing additional ICPC events over the next few years.