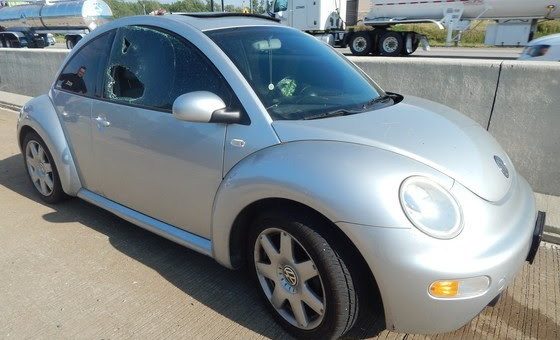 (INDIANAPOLIS) – An Indiana State Trooper saved a 31-year-old Merrillville woman’s life after finding her passed out and unresponsive in a vehicle on the side of the road.

In trying to revive her, he found she had overdosed on drugs.

On Saturday, at approximately 4:05 p.m., Trooper Regen Smith was dispatched to a possible property damage crash on I-80/94 westbound near Indianapolis Boulevard.

Trooper Smith saw a silver Volkswagen Beetle on the left shoulder up against the concrete median barrier wall.  As Smith approached the car on the passenger side she could see that the female driver appeared to be unconscious in the driver’s seat.

Trooper Smith knocked repeatedly in an attempt to rouse the female but was unsuccessful. The trooper found all the doors locked, and had to break the passenger window to gain entry.  Once inside, Trooper Smith was unable to rouse the driver and noticed the female wasn’t breathing.

Cooper was taken to Munster Community Hospital in Munster.

Trooper Smith as she attempted to find identification on the driver located two small bags in Cooper’s wallet containing heroin and drug paraphernalia.

Cooper was found to be wearing a home detention monitor due to her probation status.

After being released from the hospital Cooper was arrested on charges of operating while intoxicated endangerment, operating a vehicle on a controlled substance, possession of a narcotic drug – heroin and possession of drug paraphernalia.

She is being held in the Lake County Jail in Crown Point.

Assisting on the scene were Trooper Alissa Partyka, Hammond Fire and EMS and Bennie’s Towing.