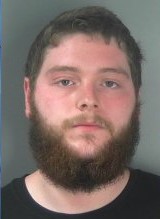 (BLOOMINGTON) – A Bloomington man was arrested after police say he threw a 4-month-old puppy against a wall.

A warrant was issued on July 19, 2019 and police arrested 21-year-old Hayden Miller on one count of animal abuse.

Miller appeared for his initial hearing in Monroe Circuit Court 9 on Thursday, July 25, 2019 and a not guilty plea was entered on his behalf. A pretrial conference is set for September 24, 2019 at 2:30 p.m. Miller is hiring a private attorney.

Police began their investigation on June 26, 2019 after a resident at an apartment complex in the 500 block of Muller Parkway called police after hearing loud thuds and a dog crying in pain.

Police arrived at the apartment and found Miller, who told them the puppy had peed on his bed, so he punished him.

Miller told police he put his dog Max’s nose in the urine and smacked him on the rear.

According to police the dog was limping and was afraid of Miller.

An animal control officer took custody of the dog.

An officer took the dog to a local vet, who said the dog was bleeding from both his eyes and found bruising inside the puppy’s ears and the in ear canals.

The vet said the injuries were the result of head trauma or strangulation.