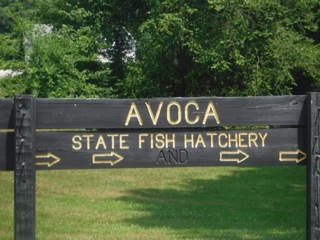 (BEDFORD) – The City of Bedford is working on an acquisition to secure the Avoca Fish Hatchery. The city has been working on the plan for the last 4 to 5 years.

Because the property lies between the 3 mile fringe of Bedford, by state law, the city can acquire the property.

“The city at the Mayor’s request has been working with Marshall Township officials, to help them establish a park board who will then manage and maintain the property,” he added.

Lawrence County does not have a park board, and they are not interested in taking over the property.

“We are looking at the long term, and not just some good intentions of an organization taking it on and finding out they cannot afford it,” said Bill James Director of Indiana Fish Hatcheries.

“At present, the City and Marshall Township are still in negotiations as they work through the legal hurdles,” he told the council.

Avoca Fish Hatchery started around the 1920s and was responsible for raising fish for Indiana waterways. The property has 13 ponds that are earthen. There are levees circle each of the ponds and a gravel path that is popular with walkers, and winds around those ponds.

A stone overlook gives hikers a view of the hatchery grounds. The property to which the hatchery sits dates to 1819 where a grist mill once sat on the grounds. It was later sold to the Hamer brothers who built the large colonial house that served as the property managers house. The house also served as an inn, post office, and grocery store.

The Department of Natural Resources purchased the property in 1919 from Hayden Bridwell, and construction began in 1923, The service building was built in 1924.

Indiana University’s Center for Rural Engagement continues to work with local officials. This is one of fifteen projects the group has undertaken. The survey received more than 700 responses and developed a 10-year plan and budget for the use and preservation of the Avoca Fish Hatchery.