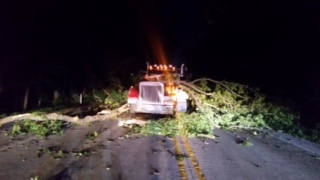 (MITCHELL) – A log truck traveling westbound on Indiana State Road 60 East near Hollace Chastain Road struck a tree that fell on the highway. The accident occurred at 4:16 a.m. Saturday morning.

A good portion of the tree appeared to have rotted out which resulted in it falling into the roadway according to the police report from the Lawrence County Police Department.

Gregory V. Gomer, of West Baden, was driving a 1999 Peterbilt owned by Hacker Sawmill Trucking Inc. Gomer only complained of a cut to his arm and pain to his hand following the incident. He declined medical treatment at the scene.

The Lawrence County Police Department investigated the accident, the Indiana Department of Transportation was called to clear the roadway, and Wilcox Towing towed the semi from the scene.