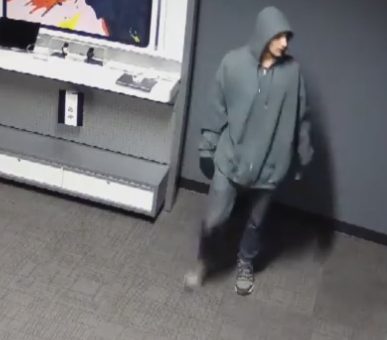 (BEDFORD) — The Bedford Police Department is asking for your help finding a person involved in a burglary on Wednesday at the AT&T Store, at 3302 John Williams Blvd.

BPD Chief Terry Moore says nothing was taken after a man broke into the store around 11:17 p.m.

Police were alerted to the break in after the store’s security alarm sounded and arrived within minutes.

“No one was in there,” Chief Moore says. “At the time, it appeared the only thing that was missing was a set of keys.”

Store video shows the male to opening drawers and then leaving the store.

“What I think he was doing was using those keys to open up the drawers to look for phones, but they were empty.”

Chief Moore says the male was only in the store a few minutes before leaving.

If anyone has information, they can call the department at 812-275-3311 or it can be reported at https://www.bedfordpolicedepartment.com/criminal-activities-tip.html