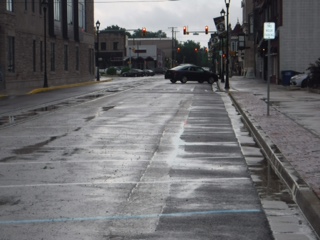 (BEDFORD – The Bedford Board of Works approved signage for J Street before you get to 14th Street.

Bedford Police Chief Terry Moore explained the need to warn motorists ahead of the angle parking that exists from 14th to 15th Street.

In addition, there are plans to add additional angle parking in the 1500 block of J Street between 15th and 16th street. This will make J Street one lane from about 14th Street down to 17th Street. By doing this it will add needed parking to the downtown. Two signs warning of the angle parking and additional one lane ahead warning signs will be added on J Street.

The Board of Works accepted the lone bid for the property at 415 J Street. Gary Sanders bid of $6,000 was accepted.

Applications for homeowner repairs from two other individuals were accepted. The approval will allow the homeowners to have some repairs or improvements done to their property. One other applicant was approved at last month’s meeting.

Insurance for dental, life insurance and health care was approved by the Board.

Dental insurance from Delta Insurance Company will remain the same for the upcoming year. The cost is $21.16 a month per person that chooses to purchase coverage. Prices for American United Life insurance will increase to $21.90 per person that purchases coverage. The city will take on the added expense of the coverage at no additional cost to the employee.

The health insurance coverage increased by 6 percent with Anthem Blue Cross and Blue Shield. Their bid was accepted over a 4 percent increase in costs over United Health and IU Health.

Sam Craig explained that the Mayor and the Clerk-Treasurer have been meeting with Miles Parker of Parker Group to explain some of the differences. Mayor Shawna Girgis and Clerk-Treasurer Marsha Pfeiffer were not in attendance at Monday’s meeting. They did however recommend going with Anthem. They say the costs and other savings that are absorbed by Anthem make it better to stay with Anthem.

“Right now, the city has not met the maximum claims for health care. Over the last ten years, the city has not seen a considerable increase in claims. Therefore, in comparison to the other two bids, there will be further savings using the Anthem Plan versus the other two companies. There are certain benchmarks within the Anthem Plan that if the city meets will reduce expenses for the city,” says Miles Parker of the Parker Group.

Because the actual claims over a 15 month period are not quite realized at this point. The costs for health care may not reach the 6 percent increase.

The Board of Works approved the hiring of Joseph Chastain for the Bedford Fire Department. Joseph is the grandson of the former firefighter Gene Branaman. He has passed his physical and psychological testing.

Chastain is waiting for the approval of Pension Board and Indiana Public Retirement fund. His expected first day on the job will be July 14th. Once Chastain is hired Fire Chief Dewayne Turpen reports the department will be back to full staff.

The final order of business was the approval for design work for Riley Boulevard Pump Station elimination, as well as the Pump Station Force Main Extension on South I Street.