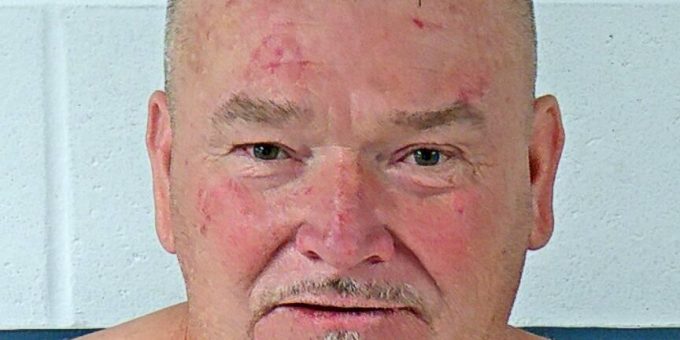 (BEDFORD) – Bedford Police arrested 61-year-old Terry Luttrell on Friday after a report of a woman screaming for help in the 200 block of 17th Street.

While responding to the call officers were told Luttrell was leaving the residence. Officers arrived and saw him pulling out of the driveway in a pickup truck.

According to BPD Chief Terry Moore, the first officer pulled across the end of the driveway in an attempt to stop Luttrell from leaving.

Luttrell then drove through the yard and rammed the second responding officer’s patrol vehicle.

Luttrell exited his truck and refused officers commands to lay on the ground. Reports say that he kept walking around the truck and was trying to retrieve something from the bed of the vehicle.

After several attempts to get Luttrell to lay on the ground, officers deployed their taser, which caused Luttrell to surrender. Officers then placed him in handcuffs.

While speaking with Luttrell, officers could smell the odor of an alcoholic beverage emitting from his breath and person.

Luttrell was transported to the hospital for a blood draw after receiving a signed search warrant from the on-call judge.  An officer then transported Luttrell to the county jail.

The woman told police that Luttrell had been drinking and that they got into an argument about said drinking.

The woman then walked outside, got inside her car, and tried to leave. Luttrell stopped her and the woman reports that Luttrell then struck her in the chest, grabbed her by her shirt and arm and pulled her out of the car. She was finally able to get away and ran to a neighbor’s house and called for help.