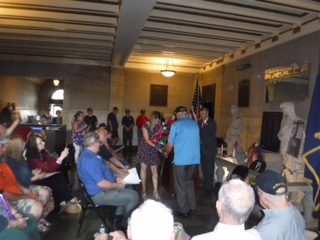 This generation of men and women was described as the Greatest Generation that ever lived. And briefly listening to some of their stories you could see why.

A few of the attributes of the men honored were patriotism, dedication, sacrifice, duty, and honor. Most of these men, who are now in their 90’s, (some lied about their age) fought and defended against Nazi- Germany.

The ceremony inside the courthouse, which lasted approximately an hour, paid tribute to the men and women who served. There were ten World War II Veterans who attended today’s event, organized by Lawrence County Veterans Officer Brad Bough.

The men today included: Gail Reynolds, Ross Johns, Paul Mitchell, Wilbur Wells, Homer Walton, Paul Miller Jr., Victor Harrell, James Lee Hutchinson, Dale Thomas, and Don Underwood. Many veterans from the Vietnam War came and paid tribute to this courageous group of men. One of those men, Kenny Fett, says, “It is worth honoring this great group of individuals. I believe we need to honor all service men and women whether they serve in war or not.”

Terry Sorrells, Commander of the Lawrence County Vietnam Organization, says, “It means everything to honor the Greatest Generation. We had a lot of casualties and death in Vietnam but what these men endured in World War II was phenomenal. Some suffering from illness prior to even fighting in the war, and some even dying. When the first wave of men hit the beaches of Normandy there was a 90 percent casualty rate.”

Shorty Sinks came from Shoals to honor these veterans. His father Leon Sinks served in World War II and served in the Army and Air Force. “I consider it an honor, to come and pay tribute to these men who served,” he said.

Paul Miller, 94, attended the celebration honoring fellow men who served. After serving in World War II, he stayed in the military for more than 40 years.

“My wife and children all served in the Military. My wife Joyce has since passed away, but my children Paul Miller III, Steve Miller, and Debra Miller, who passed with cancer all served,” added Miller. “I am very proud of my service to the country. It took some strong government officials to be able to make the decisions that they had to make. More than 10,000 men were killed on D-Day, and many 18-19 years olds did not come home. But they responded to the need of that day without question.” Miller continued.

Homer Walton’s son, Larry teared up as he described the life and service of his father. Homer was in attendance today. Homer left Needmore School in 1942 at the age of 17 to join the U.S. Navy. Pearl Harbor was attacked just months before on December 7th, 1941.

Walton, being the oldest of five children of Homer and Mable Walton, was ready to serve. He did not graduate high school, but later received his GED and is considered an alumnus of the Needmore Class of 1943.

His son described how he just started walking up to Indianapolis to sign up with just the clothes he had on wanting to serve his country. He first tried entering into the Marines, however, he was too short and they wouldn’t let him serve. He met a friend from Springville at the recruiting office and both enlisted in the Navy and they were accepted.

Walton was then called up in the Korean conflict and served in Florida, reactivating mothballed ships. His service ended in 1952. Larry stated his father only just recently opened up about some of his experiences during World War II, but mostly he has not shared much. Homer married his high school sweet heart Mary Lou Watson and had two sons, Larry and Travis. The Walton’s owned a 700+ acre farm here in Lawrence County.

During today’s ceremony the National Anthem was sung by Joanna Kai Cobb, Megan Morton read a card she written at a prior Veterans Ceremony at Shawswick Middle School, and U.S. Congressmen Trey Hollingsworth spoke about the men rising to the cause and being victorious in the call for service.

Mike Hicks and Brian Skillman then read the names of Lawrence County Veterans who lives were lost in World War II, and then Ashley Sanders and Lee Hutchinson laid a wreath in front of the podium. Following the wreath laying, Taps was played along with the 21 gun salute by members of American Legion Gillion Post 33 Honor Guard.

Terry Sanders, the Keynote speaker from the Lawrence County Disabled American Veterans, then spoke. His family has four generations of who served had one of those family members includes Ashley, his granddaughter, who just recently graduated Mitchell High School will attending the Air Force Academy.

Sanders described how the war played out, the planning that it took to be able to execute the plan, the large number of resources, and most of all the military personnel it took to pull it off. And of course, the number of lives injured and killed in the battle.