(BLOOMINGTON) – Mars will be halfway up the southwestern sky an hour after sunset during March, not setting until near midnight. By month’s end, the red-orange planet will be just 3 degrees south of the beautiful Pleiades star cluster. The two will be in the same visual field of binoculars from March 23 to early April. 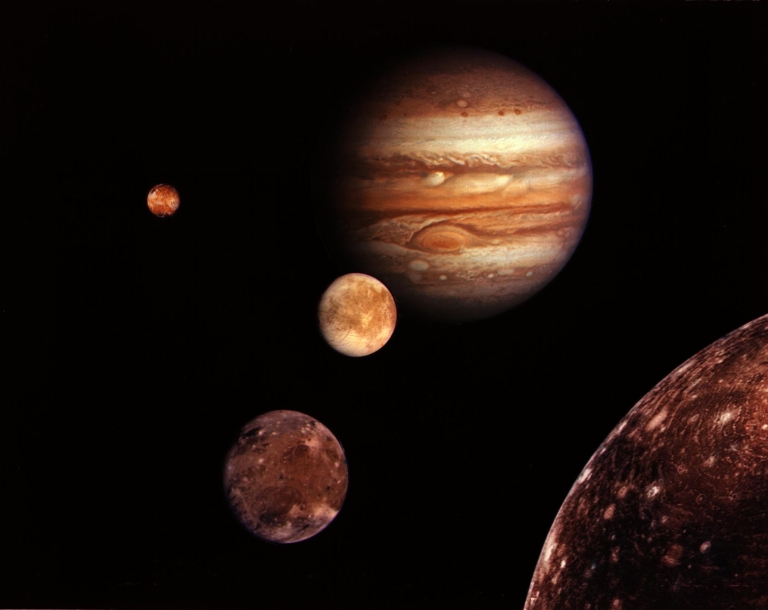 The solar system’s largest planet, Jupiter, will grow larger and brighter in the night sky throughout March. Image courtesy NASA/JPL
Jupiter will come into view in the southeast around 2:30 a.m. standard time at the start of March and 1:30 a.m. daylight time by month’s end. It will grow larger and brighter as the month goes by. The best time for viewing Jupiter with a telescope will be when it is highest before sunrise.
Saturn will rise about two hours after Jupiter at the start of March. It will be at a minimum in brightness, with its rings tilted 24 degrees to our line of sight. Saturn’s largest moon, the planet-sized Titan, can be seen with any telescope.
Venus will rise about two hours before the sun as March begins, but it will stand only about 10 degrees above the southeastern horizon 45 minutes before sunrise. The gleaming white planet will fade somewhat during the month.
Mercury will be low in the west after sunset during the first week of March, fading rapidly before disappearing into the sun’s afterglow. It will pass between Earth and the sun on March 15.
Equinox
The sun will cross the celestial equator (an extension of Earth’s equator onto the sky) at 5:58 p.m. EDT (9:58 Universal Time) March 20 heading north. This will mark the start of spring in the Northern Hemisphere and autumn in the Southern Hemisphere. For the next six months in the Northern Hemisphere, the days will be longer than the nights.
Day and night are not precisely the same length at the time of the equinox. That happens on different dates for different latitudes. At higher latitudes in the Northern Hemisphere, the date of equal day and night occurs before the March equinox. In the Southern Hemisphere, this happens after the March equinox. Information about the exact time of the equinox at different places on Earth’s surface is provided by the U.S. Naval Observatory.
Zodiacal Light
If you live in an area that is dark enough for you to see the Milky Way sprawling across the night sky, you also have a chance of seeing the interplanetary dust in the plane of our solar system. Moonless evenings in late winter and early spring are the best time to see this dust.
As darkness falls, look for a faint pyramid of light spreading upward from the western horizon over a large area of the sky. This is the zodiacal light, which is sunlight reflected from trillions of dust particles left behind in space by comets and asteroids that orbit the sun in the same plane as the planets.
Moon Phases
The moon will be new on March 6, at first quarter on March 14, full on March 20 and at third quarter on March 28.
Information, News at IU Bloomington, https://news.iu.edu