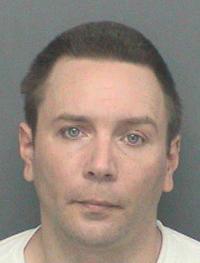 After a male resident exited the residence and told officers his “30ish” year old grandson was upstairs in his bedroom, ISP SWAT began observing movement in an upstairs window. SWAT used multiple audio and visual tactics in an attempt to get the remaining occupant to exit the residence.
No communication was returned by the subject as ISP SWAT continued to give loud verbal commands to do so.
Regarding the close proximity to local schools, Mooresville Consolidated School System was given notice and a cautionary school lockdown was put into place. ISP SWAT deployed their robot just before 3 p.m. and 36-year-old Michel Basey surrendered.
Officials seized several packages of marijuana totaling more than 10 pounds, drug paraphernalia, digital scales and ledgers were located during the search.
Basey was arrested and incarcerated in the Morgan County Jail on charges of dealing marijuana over 10 pounds, possession of marijuana over 10 pounds, reckless possession of drug paraphernalia and dealing marijuana within 1,000 feet of a school.
Brown Township Ambulance assisted staging near the area.