(CULVER) – An Indiana veteran recently adopted the bomb-sniffing dog he served with in Afghanistan, and he says the retired canine is settling into a pampered life.

Army veteran Joseph Steenbeke served nearly a year in Afghanistan with a Belgian Malinois named Tess, who rarely left his side. Steenbeke got only minutes to say goodbye to his canine partner when his tour ended in February 2013. 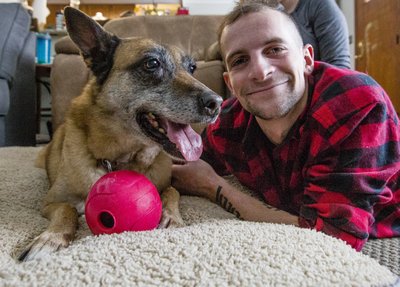 Joe Steenbeke poses for a photo with Tess at their home in Culver
Steenbeke then spent years trying to adopt the now 11-year-old dog, who went on to serve with the Connecticut National Guard before her retirement last week.
On Saturday, Steenbeke and his wife, Stephanie, returned home after picking up Tess in Newtown, Connecticut, the South Bend Tribune reported. The playful canine is now getting used to her new home in the northern Indiana town of Culver, about 30 miles (48 kilometers) south of South Bend.
“We’re just looking forward to giving her a good retirement life. She’s worked so hard her entire life now she gets to sit back and have fun and live like an eccentric billionaire,” Steenbeke said with a laugh.
In the six years since they parted, Tess’ muzzle has turned a bit gray, but Steenbeke said she is still energetic and loves to jump up to give him kisses. Tess’ new favorite toy is a large, red ball she enjoys chewing while curled up on her dog bed.
The adoption approval took lots of paperwork and help from family, friends, nonprofits and U.S. Rep. Jackie Walorski’s office.
Walorski called Steenbeke on Jan. 23 to inform him that he could adopt Tess, whose ID number is tattooed on his arm.
“I know that she’s going to be in a great home that loves her from now until forever. I’m just happy to have her back,” Steenbeke said.
Information from: South Bend Tribune, http://www.southbendtribune.com