(VALLONIA) – Police rescued a Seymour couple near Vallonia on Saturday after their truck stalled in floodwaters.

Jackson County Deputy Jesse Hutchinson responded to the 6500 block of South County Road 600 West after 28-year-old Cace Tarr reported he had driven his white Chevrolet 1500 into the high water and it stalled. His 43-year-old wife Cherie Fortino-Tarr was also in the vehicle. 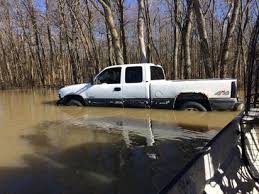 Deputy Hutchinson responded to the scene at 12:26 p.m., but could not reach the vehicle. The water was up to the door of the truck.
Driftwood Township Volunteer Fire Department firefighters responded but were unable to make the rescue.
Indiana Conservation Officer Nate Berry responded with an airboat, and police were able to rescue the couple. The couple were out of the truck and water by 1:15 p.m.
Police reminded motorists to not drive through floodwaters, turn around and seek alternate routes.
This is not the first rescue in Jackson County.
On Wednesday, Jan. 2, a 75-year-old Seymour man was rescued from floodwaters after his 2018 Subaru Forester was swept away in flood waters in the 1500 block of East County Road 300 North in the Shieldtown Bottoms near Shieldftown Covered Bridge. 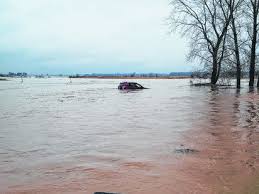 According to Jackson County Sheriff Department deputies, Morris Hirtzel’s vehicle was swept more than 50 feet into deeper water. Water filled the vehicle up to the steering wheel. Hirtzel could not swim, so Indiana Conservation officer Nate Berry launched a fan boat. With the assistance of Deputies Rob Henley and Mark Holt the three pulled Hirtzel through the drivers-side window.
That same day Jackson County deputies rescued a woman who drove through floodwaters in the 2500 block of North Base Road in Brownstown. The woman drove through water but was able to continue onto dry land.