William Donald (Billy) Young – Bedford
January 4, 1964 – July 7, 2018
William Donald (Billy) Young, 54, of Bedford, died Saturday, July 7, 2018.
Born January 4, 1964, in Lawrence Co., he was the son of Bob and Sandy (Cain) Young. He married Kimberly D. Gardner on April 19, 1986 and she survives. Upon graduation from high school, Billy worked with his father at Goodyear from 1982 to 1995. He later opened and operated Kar Kwik Muffler and Brakes in Bedford in October 1997. Billy was a member of Crossroads Community Church and N.H.R.A. He loved drag racing and working on race cars with his son. He loved his granddaughter, Gracie, who was the light of his eye.
Survivors include his wife, Kimberly, of Bedford; his mother, Sandy Young, of Bedford; a son, William McColley Young and wife, Brenna, of Bedford; a granddaughter, Norah Grace Young; three sisters, Bobbi Roy and husband, Bill, of Urbana, IL, Beverly Beasley and husband, Kenny, and Polly Craig and husband, Kevin, all of Bedford; a sister-in-law, Tamara Gilbert, of Bedford; nieces and nephews, Patrick Craig and wife, Mandy, Edward Roy and wife, Colleen, Camden Spinks and wife, Stephani, Teela Beasley, Kara Jo Hohimer, and husband, Eric; two great nieces; 1 great nephew and several cousins.
He was preceded in death by his father, Bob, and in-laws, Dennis and Judy Gardner.
Funeral services will be conducted at 2 p.m. on Friday, July 13th in the Elmwood Chapel of the Day & Carter Mortuary with Pastors Greg Eads, Dan Hodge and Reno Bates officiating. Burial will follow in Gilgal Cemetery. Visitation will be from 1 p.m. until 8 p.m. on Thursday, July 12th at the Day & Carter Mortuary and from Noon until the hour of service at 2 p.m. on Friday at the church.
Family and friends may express condolences at www.daycarter.com.
Gloria D. (Rivers) Deckard -Bedford 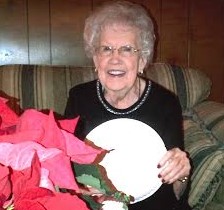 July 3, 1925 – July 8, 2018
Gloria D. (Rivers) Deckard, 93, of Bedford, died at 12:15 p.m. on Sunday, July 8, 2018 at her residence.
Born July 3, 1925 in Lawrence Co., she was the daughter of Marvin and Gertrude (Holmes) Rivers. She married Oliver “Jody” Deckard in 1958 and he preceded her in death in 1993. She was a graduate of Needmore High School with the class of 1944. She was a homemaker, a member of the Valley Mission Church of the Nazarene and attended the Oolitic Baptist Church. She was an avid reader, especially Danielle Steele and John Grisham, and instilled a love of reading in her children.
She loved to shop with her family. A devout Christian, she raised her children to be honest and always do the right thing, to have a strong character and work ethic, to never give up. She loved music and Alabama was her favorite group. Gloria worked hard to keep an orderly and tasteful household. She faced challenges in her life with grit and determination, was a great example for her children and grandchildren. A member of the greatest generation.
Survivors include two daughters, Jody Edwards and husband, Pete, of Bedford and Barbara Grinstead and husband, Steve, of Batavia, OH; a son, Bill Davis, of Bedford; three grandchildren, Andrew Davis and wife, Melissa, of Astoria, OR, James Edwards and wife, Kelsie, of Bedford, Megan Bowman and husband, Andrew, of Brazil, IN; two sisters, Cathy McIntyre and husband, Terry, and Donna Carpenter, both of Bedford; several nieces and nephews.
She was preceded in death by her parents and a step-son, Jerry Deckard.
Funeral services will be conducted at 10 a.m. on Thursday, July 12th in the Elmwood Chapel of the Day & Carter Mortuary with Rev. Richard Tallman and Rev. Taylor Quinley officiating. Burial will follow in Green Hill Cemetery. Visitation will be from 4 p.m. to 8 p.m. on Wednesday, July 11th at the Day & Carter Mortuary.
The family would like to thank I.U. Health Hospice for the wonderful care given to Gloria and ask that friends consider memorial contributions be made to I.U. Hospice House.
Family and friends may express condolences at www.daycarter.com.
Joshua Lee Grubb – Bedford
September 20, 1980-July 6, 2018
Bedford-Joshua Lee Grubb, 37, of Bedford died Friday, July 6, 2018.
Born September 20, 1980 in Bedford, IN he was the son of Jim and Jan (Casselman) Grubb. He was a construction
worker- laborer with the Laborer’s Union #741.
Survivors include: his parents, Jim and Jan Grubb of Bedford; one daughter, Kaylee Grubb of Bedford; one son,
Kane Grubb of Bedford; one brother, Jeff Grubb of Bedford; one nephew, Hunter Grubb of Bedford; one niece, Emma Grubb of Bedford; his paternal grandfather, Homer Grubb of Bedford.
He was preceded in death by his maternal grandparents, Richard and Mary Casselman, and his paternal grandmother, Geneva Grubb.
A Celebration of Life will be held at 7 p.m. on Thursday, July 12th , 2018 at the Mount Pleasant Christian Church with Pastor Jeff Hudelson officiating. Visitation will be from 5 p.m. until the hour of service on Thursday at the church.
In lieu of flowers memorial contributions can be made to an education fund set up for Josh’s children.
Family and friends may express condolences at www.daycarter.com.