Bonnie Bray – Bedford
Bonnie Bray, 46, of Bedford, died at 5:56 am on Saturday, August 30th at St. Vincent Hospital in Indianapolis.
Arrangements are pending at the Day & Carter Mortuary.
Steven Joe Padgett – Bedford
Steven Joe Padgett, 67, of Bedford, died at 8:40 pm on Monday, September 1st at his residence. Arrangements are pending at the Day & Carter Mortuary.
Mary K. Eads – Bedford
Mary K. Eads, 68, of Bedford died at 10:39 am on Saturday, August 30th at I.U. Health Bloomington Hospital.
Arrangements are pending at the Day & Carter Mortuary.
Elnora Jeanette Martin – Springville
Elnora Jeanette Martin, 74, of Springville, died at 9:35 pm on Saturday, August 30th at I.U. Health Hospice House.
Arrangements are pending at the Day & Carter Mortuary.
Edwin “Eddie” Walton – Bedford
Edwin “Eddie” Walton, 41, of Bedford, passed away on Sunday at IU Health Bedford.
Arrangements pending at Cresthaven Funeral Home
Don Deckard – Bedford
Loniel Don Deckard, 74, of Bedford, went to be with Jesus on Saturday evening, unexpectedly.
Born September 6, 1939, he was the son of Wayne and Lavonia (Phillips) Deckard. He married Betty Arthur on July 11, 1964 and she survives. He was a graduate of
Smithville High School. He retired on Feb. 28, 1993 from Central Foundry where he was a fork lift operator for over 28 years. He is of the Pentecost Faith and attended The Blackwell Pentecostal Church.
Survivors include his wife, Betty; one daughter, Treva Sommers and husband Ray of Ft. Worth, TX; one son, Troy Deckard and fiancé Wendy Hedrick and her daughter Kyla of Bedford; one granddaughter, Nicki Sommers; two sisters, Shirley Sowder and husband Farrell of Bedford, June Hammond and husband Marvin of Bedford; one niece, Cami Terry and husband Mike; two nephews, Doug Sowder and wife Lisa, Jeff Hall and wife Toni.
He was preceded in death by his parents, grandparents, one brother in infancy, Marvin Dean Deckard, and a brother-in-law, Wayne Hall.
Funeral services will be conducted at 2 pm on Wednesday, September 3, 2014 in the Elmwood Chapel of the Day & Carter Mortuary with Pastor Darren Bowlen and Rev. Darren May officiating. Burial will follow in Chapel Hill Cemetery. Visitation will be from 4 to 8 pm on Tuesday, September 2, 2014 at the Day & Carter Mortuary and from 10 am until until the hour of service on Wednesday.
Family and friends are invited to sign the guest book and light a candle in memory of Don at www.daycarter.com.
C. R. Miracle – Mitchell 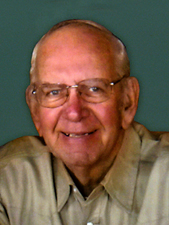 C. R. Miracle, 78, of Mitchell, passed away at 6 a.m. Tuesday,August 26, 2014, at his residence.
Born August 27, 1935, in Stanford, Kentucky, he was the son of Henry Robert and Mayme Ross (Stamper) Miracle. He married Patricia Joan Alexander December 29, 1957.
He was a master electrician with Alexander Electric, and a dairy farmer. C. R. graduated from Mitchell High School in 1953 and Purdue University in 1958 with scholastic honors, and was a member of Alpha Zeta. He enjoyed farming, fishing, gardening, repairing pocket watches, Martin watching, and anything John Deere. He
served as a 4-H Leader and was manager of Normandy Farm in Indianapolis. He was a member of Mitchell Masonic Lodge No. 228 F&AM, past president of the Pike Township Farm Bureau, past president of the National Guernsey Cattle Club, and a former member of the Junior Chamber of Commerce and Pike Township Fire Department Board of Directors. He was a member of the First Baptist Church and served in the choir, and as a deacon and trustee. C. R. was a U. S. Army veteran.
Survivors include his wife, Patricia Miracle, Mitchell; children, Alexander R (Tracy) Miracle, Bloomington, Cynthia Dawn (Steven) Sipe, Lebanon, Steven Ray (Brandy) Miracle, Springville; sister, Phyllis (Oakleigh) Westfall, Bedford; brother, Robert F. (Judy) Miracle, Bloomington; 9 grandchildren; 2 great grandchildren
His parents preceded him in death.
Celebration of Life service will be at 11 a.m. Saturday, September 6, at the First Baptist Church with Reverend Reggie Clark officiating. Military honors will be accorded by American Legion Post No. 250 and Veterans of Foreign Wars Post No.
9107.
Memorial Gifts: First Baptist Church or Lawrence County Cancer Patient Services.
Condolences may be sent to the family at www.chastainfuneralhome.com