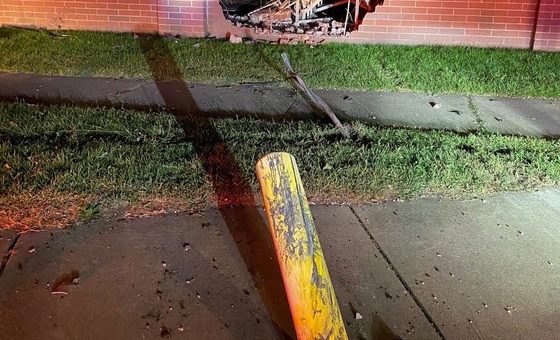 MICHIGAN CITY – On Thursday, September 22nd, at approximately 8:10 p.m. the Michigan City Police Department requested the Indiana State Police to investigate a fatal crash that occurred in their city.

Officers attempted to initiate a traffic stop; however, the driver refused to stop resulting in a pursuit.  The driver continued to flee at relatively low speeds through city streets until the vehicle drove south on Washington St. from Barker Ave.  As he drove south on Washington St., the driver accelerated to a high rate of speed and failed to stop at the intersection of Skwiat Legion Ave.

The vehicle then struck the concrete pillars that provide a barrier to Ames Field.  After striking the pillars, the vehicle went airborne into the brick wall of the bleachers and through that wall coming to rest under the bleachers.  The driver had to be extricated from the vehicle.

Life-saving measures were performed on the driver; however, he was declared deceased at the scene by the LaPorte County Coroner’s Office.  The deceased has been identified as Grant J. Grable, 18, from Bourbonnais, IL.