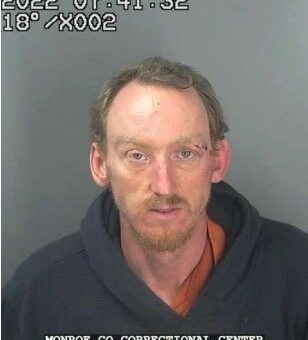 BLOOMINGTON – The man that barricaded himself in the storm sewer in Bloomington also faces a charge of sexual battery after an incident earlier that day.

According to a probable cause affidavit, police were first alerted of 37-year-old Eli Swartzentruber’s activity on Tuesday, Sept. 20 at around 8:30 a.m. when a woman told police he sexually assaulted her just two hours earlier.

A woman reported Swartzentruber arrived at her cabin on West Koontz Road at 6:30 a.m. and asked her if she would go “live underground” with him. When she told him that she did not want to go, Swartzentruber allegedly pulled out a machete and told her he would be back in ten minutes.

Swartzentruber told her while armed with the machete, “I’ll bail you out, break you out and the police will have to take me down dead before they take me because I got this.”

He then squeezed the woman’s neck and kissed her, took off his pants, and stuffed cash down her shirt.

The woman used the excuse that needed to go outside and use the restroom in an attempt to escape. She grabbed her bag and Swartzentruber’s pants to prevent him from following her as she went outside.

By the time police were contacted and arrived on the scene Swartzentruber had fled.

But a short time later, at 9:30 a.m. police responded to Seminary Park after a report of a man with a hatchet.

When officers arrived, a man with a hatchet laid the weapon down and approached them. He told police a man (Swartzentruber) attacked him and threw the hatchet at him. He then informed the officers that Swartzentruber had retreived the hatchet from a truck located in the Kroger parking lot.

The truck was registered to Swartzentruber.

Others in the park also reported Swartzentruber attacked them and had swung a metal rod at them.

Investigators found Swartzentruber’s clothing near a storm drain and determined he had entered the city’s underground sewer system.

Prosecutors are treating the two incidents as separate cases.