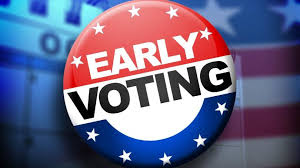 You can vote from 8 a.m. until 4 p.m. and until noon on November 7 at the Lawrence County Registration Office at Courthouse Plaza.

Saturday early voting is scheduled for October 29th and November 5th from 8:30 a.m. until 2:20 p.m. at Courthouse Plaza and at the Mitchell Community Center at 101 Tom Green Drive.

Voters need to show an Indiana driver’s license, an Indiana ID, or other photo ID issued by the state of Indiana or the US government.