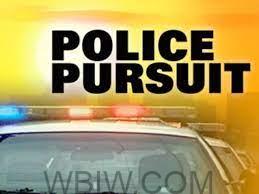 BLOOMFIELD – On Tuesday, September 20th at 4:50 p.m. a caller reported a suspicious male and female at 1172 East State Road 58 at the White River Co-Op.

According to Greene County Sheriff’s Department Sergeant Jordan Allor, the caller reported the people were trying top purchase a butane torch lighter and trying to sell their vehicle to patrons at the gas station.

Due to deputies being out of position, Lt. Marvin Holt with the Bloomfield Police Department responded to the area to
investigate.

Lt. Holt attempted to stop the vehicle and it fled north on US 231 towards Bloomfield.

While Lt. Holt was in pursuit, the Greene County Sheriff’s Dispatch advised the vehicle was stolen out of Iowa. Once the vehicle reached Bloomfield, the driver drove off the roadway near Furnace Road and proceeded east on Furnace Road.

Jordan continued traveling south on US 231 until reaching State Road 645 in Daviess County.

He then turned east onto State Road 645 and headed toward the Burns City Crane gate. When he reached the gate he stop. He then backed the vehicle into Marshal Gambill’s patrol vehicle. Once Jordan got the car turned around, he traveled west on State Road 645. At the intersection of State Road 645 and US 231 Jordan disregarded a flashing red light and proceeded traveling west onto County Road 1125 North in Daviess County.

Jordan and his passenger Ashley Kleinhans refused to exit the vehicle after the crash.

Deputies from Martin County, Daviess County, officers from Loogootee Police Department and troopers with the Indiana State Police arrived on the scene to assist.

Daviess County SWAT team was able to break the back window with a Sponge Round where a chemical agent was released into the vehicle. A short time later Jonathan Jordan and Ashley Kleinhans exited the vehicle and were taken into custody.

Jordan was transported to the Greene County General Hospital where he was medically cleared for
incarceration. Ashley Kleinhans was released from the hospital for medical reasons.