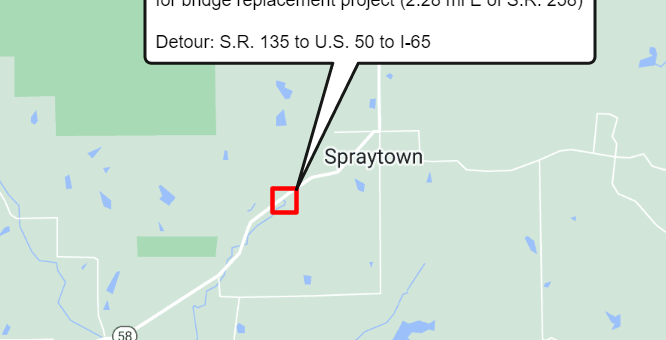 JACKSON CO. — The S.R. 58 bridge closure over Branch Runt Run has been rescheduled to on or after Monday, September 26, in Jackson County. The bridge is located just over two miles east of S.R. 258 near Spraytown. The closure will last up to 90 days with an official detour route that follows S.R. 135, U.S. 50, and I-65.

Three additional projects are included in the $2.7 million contract that was awarded to Milestone Contractors LP in June. All three are scheduled to be completed next year.

INDOT reminds drivers to use caution and be aware of workers and equipment when traveling through active work zones. All work is weather-dependent and schedules are subject to change.