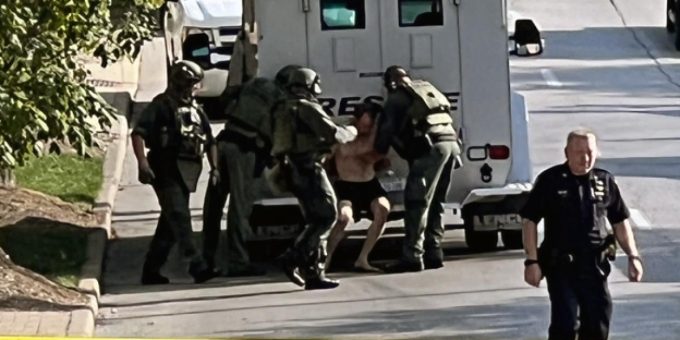 BLOOMINGTON — Police armed with city diagrams, flashbangs, and cameras searched the City of Bloomington’s sewer system for an armed suspect hiding from the police. It was ultimately Indiana State Police K-9 Loki that apprehended the man after an eight-hour standoff.

Eli Swartzentruber, 37, was arrested on felony charges of attempted battery with a deadly weapon and intimidation.

According to a press release by Bloomington Police Captain Ryan Pedigo, on Tuesday, September 20, 2022, at approximately 9:30 a.m., Bloomington Police Department (BPD) officers responded to Seminary Park for a report of Swartzentruber swinging a steel rod at several individuals. While officers were en route to the park, it was reported that Swartzentruber had gone to a vehicle in the nearby Kroger parking lot and retrieved a hatchet.

Swartzentruber then reportedly walked toward the same individuals in the park and threw the hatchet at them.

After officers arrived witnesses reported Swartzentruber left the area on foot and was last seen walking south toward First Street.

Officers began checking the area and located clothing hanging from a railing along First Street that appeared to be clothing that matched what Swartzentruber was wearing. The clothing was on a railing near a very large storm drain exit that leads north towards the downtown between College Avenue and Walnut Street.

At that point, officers took a position of cover and waited for additional officers to arrive. Due to the violent acts of Swartzentruber along with the threat that he was armed with a rifle, a decision was made to have the BPD Critical Incident Response Team (CIRT) respond to search for Swartzentruber. BPD also requested that employees from the City of Bloomington Utilities respond to the scene with diagrams of the underground storm drain system that is connected to the box culvert where the man went underground.

A Special Weapons and Tactics (SWAT) Team from the Indiana State Police were requested to respond due to the large area that needed to be searched.

Officers used camera equipment designed to inspect the storm sewer in an effort to locate Swartzentruber but failed to do so in the section of sewer that runs north under Walnut Street and then west towards College Avenue near Smith Avenue.

However, as officers removed manhole covers to attempt to make contact with Swartzentruber, an unfired rifle cartridge was discovered in the sewer below Smith Avenue that appeared to have just recently been dropped.

Members of the Critical Incident Response Team did utilize noise-flash diversionary devices (NFDDs) inside the storm sewer, which resulted in several loud bangs that could be heard by nearby residences and businesses.

While the search was underway, investigators were able to identify 37-year-old Eli Swartzentruber, who is homeless as their suspect. Police learned that Swartzentruber was wanted on an outstanding warrant in Daviess County for a felony charge of battery against a public safety official. Monroe County Sheriff’s Office investigators were also actively attempting to locate him on several felony charges from an incident that he was alleged to have been involved in earlier in the morning of September 20th.

Indiana State Police South SWAT members were able to deploy a City of Bloomington Utilities camera into the connecting storm sewer from the area of N Indiana Avenue and East 6th Street. Once the camera was approximately 500 feet into the storm sewer, officers observed a man that matched the description of Swartzentruber. It is believed that this area would be under Kirkwood Avenue. Swartzentruber stated that he would exit the storm sewer on the north end, but then attempted to flee back to the southwest further into the storm sewer after destroying the camera.

Troopers with ISP South SWAT were then able to take Swartzentruber into custody. Swartzentruber was escorted out of the storm sewer and was placed into the back of an ambulance to be transported to IU Health Bloomington Hospital for treatment.

Swartzentruber was in possession of an empty handgun holster on his person at the time of his arrest. Investigators searched the storm sewers but did not locate a rifle or a handgun. However, several unfired .30-06 rifle cartridges were located along with a hand scythe and a machete.

Officers will continue to search the storm sewers in the coming days in an effort to locate any firearms.

Once released from the hospital, Eli Swartzentruber was transported to the Monroe County Jail on the outstanding warrant and new charges of attempted battery with a deadly weapon and intimidation.