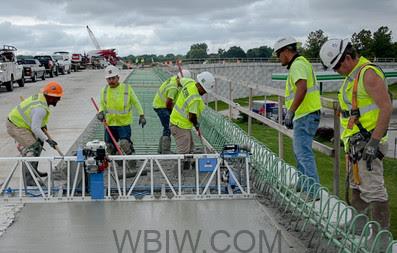 Expect southbound traffic to be restricted to one lane between 8 a.m. and 5 p.m. on Tuesday to move temporary barriers and adjust pavement markings. Northbound traffic is scheduled to shift late this week or early next week.

When the new traffic pattern takes effect, S.R. 37 will be almost entirely on new pavement and bridges between Southport Road and S.R. 144. Crews are building the new I-69 lanes in pieces and passing an important halfway point. You can follow along with the Tracking Progress dashboard on I69Finishline.com.

Expect the new Mann Road bridge over I-465 to open late this week or early next week. Stay alert for paving and signal work on Mann Road near the bridge and the I-465 ramps.

Retaining wall construction for the future I-69 overpasses has restricted Wicker Road to one lane only. Temporary traffic signals have been installed in the work zone to control two-way traffic.

Construction of the future I-69 lanes and interchange will require a long-term closure of Epler Avenue and Belmont Avenue west of S.R. 37. Expect the closure to begin in early October once utility crews have cleared the area.

Click here for a map of the closure locations and the detour, which follows Banta Road and Concord Street.

The future I-69 interchange at S.R. 144 opened partially on Friday morning, removing another stoplight and improving the safety of S.R. 37. Two new ramps are open and two more are under construction, requiring a detour.

Click here to view a map and learn more about alternate routes.

The traffic signal at Banta Road south of S.R. 144 is still active. Please pay attention to this intersection as it is the only traffic signal between Smith Valley Road and Evansville, IN.S.R. 144 traffic has shifted onto the new pavement and the new bridge over future I-69. Old S.R. 37/Waverly Park Road has reopened north of S.R. 144 at a temporary traffic signal.

Traffic approaching a roundabout should always yield to traffic already in a roundabout. This is the case where the new S.R. 37 ramps intersect S.R. 144.

Watch for lane shifts where S.R. 37 is restricted to two lanes (one in each direction) north of Martinsville. Expect the northbound lanes to be paved on Tuesday and the Henderson Ford ramps later this week. Crews are also painting bridge beams, installing cable barriers, and removing temporary driveways near the Myra Lane and Teeters Road overpasses.

Paving of Bobby Helms and Bill’s boulevards in the Artesian Square Shopping Center is expected to occur this week. Expect the Ohio Street traffic signal at the Ruth Rusie Way entrance to be activated late this week or early next week.

Expect lane and shoulder closures this week along I-69 and the ramps between S.R. 252 and S.R. 44 for barrier wall painting.