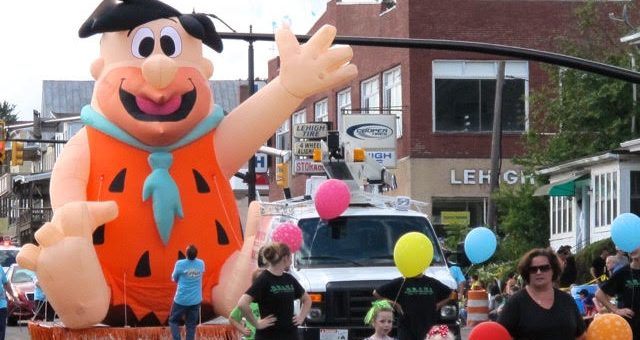 MITCHELL – An impressive week of free entertainment, delicious food, and a downtown full of activities, displays, contests, and memories celebrating “75 Years of Persimmon Traditions” will culminate Saturday afternoon when the action-packed Persimmon Festival Parade steps off from Lehigh Field and winds its way through the streets of Mitchell. This year’s grand parade is one you won’t want to miss!

The parade begins at Lehigh Field at 2 p.m. Saturday, Sept. 24. It travels west on Main Street to Mitchell’s historic downtown. The parade will then turn north on Seventh Street for one block, before taking a turn west on Warren Street for a block. It then winds its way north on Eighth Street to Bishop Boulevard, named for the festival’s founder, George Bishop, a longtime educator and administrator at Mitchell Community Schools. Take note, however, one parade surprise will stop before Lehigh Street simply due to space constraints in the area.

This year’s parade will feature about 80 units, according to Parade Chairwoman Vicky Schlegel. Schlegel is being assisted with the planning by Toya Lamm.

“We are excited about this year’s parade,” Schlegel said. “It’s going to be an impressive lineup that is sure to thrill and delight people of all ages.”

The parade will include locally made floats designed by the Mitchell High School Art Club as well as those designed by community groups. It will feature many Shriner acts and musical montages that will delight spectators. The Circle City Sidewalk Stompers Clown Band, Dueling Pianos, an antique calliope, and Michigan City Soul Steppers are among the acts coming in to entertain the masses.

“We will have two marching bands, and a lot of creative commercial entries that we know people will love,” Schlegel said.

The newest treat this year will be the addition of six parade balloons, including the “floating persimmon.” However, due to a helium shortage, five of the six floats will be aired up and pushed through the parade on specially designed carts. In addition to the persimmon, Bugs Bunny, a Smurf, Humpty Dumpty, Fred Flintstone, and Yogi Bear will be aired up and traveling through the grand parade. (The balloons will end near the Emerson school building before Lehigh Street, so they can be deflated and miss large trees in the area. Anyone watching the parade north of the administration building will want to move south to view the balloons.)

“We’re evoking a sense of nostalgia, thanks to the generosity of one of our amazing sponsors, who wanted to make sure the parade is memorable,” Schlegel said. “The entire Mitchell community is gearing up for an amazing week, and we hope visitors come and enjoy all the wonderful opportunities we have in store to celebrate our 75th anniversary.”

The parade will be led by Grand Marshal Diana Bishop Chastain, the daughter of George Bishop. Chastain was chosen as a nod to the festival’s history. Without her father’s commitment to the festival, our schools, and our community, the Persimmon Festival wouldn’t be what it is today.

This year’s parade announcer will be Tim Thompson. He will be set up near the Main Street Stage to describe each entry to those downtown. A disc jockey will be set up on North Eighth Street to create a festive atmosphere for the spectators on that end of the parade route.

Information about the parade, as well as a complete schedule of events for the festival, is available online at http://www.persimmonfestival.org.