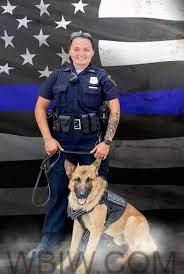 “It is with profound sadness that we announce that Officer Seara Burton #140/K9-2 passed away at 9:59 p.m. tonight at Reid Health surrounded by her family,” the department said in a post on Facebook Sunday evening. “We would sincerely like to thank the Richmond community, and those who have supported Seara, her Family, and the Department from near and far.”

Burton was surrounded by her family at Reid Health when she succumbed to her injuries from five weeks prior, according to Richmond Police Chief Michael Britt.

“The family is extremely grateful for the massive amount of support from the community. We kindly ask that you respect the family’s privacy during this difficult time,” the department said.

“Our hearts are heavy as we grieve alongside Officer Seara Burton’s family, colleagues, loved ones, and the Richmond community she so nobly served. Officer Burton dedicated four years and her life to the Richmond Police Department and lived the oath she took to serve and protect to the fullest,” said Governor Holcomb. “Janet and I send our condolences to Officer Burton’s family and loved ones as they search for peace and strength from a power greater than all we can muster.”

Officer Burton was taken off life support on September 1 and an honor walk was held at the hospital. She was then moved to a hospice facility in Richmond.

Officer Burton was shot on August 10th while responding to assist other officers on a traffic stop at North 12th and C streets in Richmond.

During that traffic stop, Burton used her canine partner Brev to conduct a search on a moped. The dog alerted officers to drugs.

While officers were talking with the driver of the moped, Phillip M. Lee, 47, of Richmond, pulled out a firearm, fired several rounds at officers, and struck Burton. in the head. Other officers returned fire, hitting Lee and he ran.

Lee was later apprehended after a chase.